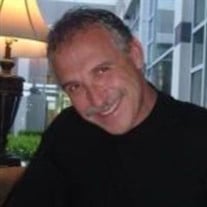 Achilles George Tom Mamalis, 61, left this earth on June 25, 2021, following his courageous journey with AML. He was born on May 4, 1960, to George and Vasiliki Mamalis in Volos, Greece. Achilles was proceeded in death by his parents and his father-in-love, James Moody. He is survived by his 8th world wonder, his beloved wife, Pamela; daughter Victoria and granddaughter Naomi of Dallas, Texas; sister Soultana of Volos, Greece; mother-in-love Patty Moody of Broken Arrow, OK; sister-in-love Stephanie Oktay (Alan) and brother-in-love Larry Moody (Mary) of Broken Arrow, OK and five nephews, one niece, two great-nephews, one great niece and a goddaughter. Achilles came to the United States when he was 17 and proudly became a US citizen in 1994. He was a very proud Greek and equally proud of his US citizenship. He worked in the hospitality industry, overseeing many hotels, such as Hilton, Marriott, Sheraton and the Ritz Carlton. Achilles and his wife, Pamela, met in Dallas, Texas and after a few years of dating, they married on November 22, 2009. Their journey took them to multiple states, making numerous lifelong friends along the way and they were just settling into their new lake home on Lake Tenkiller in Oklahoma. They loved to travel the world which included multiple trips back to their other home in Mamaleika, Greece. Achilles was a lover of wine and tsiporou and welcomed any opportunity to share a bottle of either with his family and friends. Fall weekends were often spent cheering on the Georgia Tech Yellowjackets, the OSU Cowboys (for his wife) and the Atlanta Falcons, and in the Spring, he cheered on the Braves. He loved his Greek music and would often dance along with it. He also enjoyed golf, often playing with his best friend, Kevin, whom he claimed as his brother. He recently checked off his bucket list by playing golf at St. Andrews in Scotland. Achilles was an amazing Baba to his daughter Victoria (“Vicaroula” as he called her), and Papou to his granddaughter Naomi, and he leaves an amazing legacy through them. He treasured every moment he spent with them, and they both loved and adored him as he did them. Naomi shared his love for Greek wine after only one sip and looked forward to someday sharing a bottle with him. He was also an incredible Theio to Giorgos and Nikos who adored and idolized him. Throughout Achilles’ life, he positively impacted so many lives, not only here, but across the world. Those who were blessed to know him, loved and adored him. What he left behind is not what is engraved in stone, it is what is woven into the lives of others. Family and friends are invited to attend a Celebration of Life for him on Saturday, July 3rd at 3PM at Floral Haven, 6500 S 129th E Ave, Broken Arrow, OK 74012. There will also be a visitation at the same location on Friday, July 2nd, at 4-6PM. In lieu of flowers, donations may be made in his name to Restored Hope Ministries online at https://www.restoredhopeministries.org. If you cannot attend the service in person we will be webcasting the service at the following link: https://webcast.funeralvue.com/events/viewer/56362/hash:3B673568CA7DEB55

Achilles George Tom Mamalis, 61, left this earth on June 25, 2021, following his courageous journey with AML. He was born on May 4, 1960, to George and Vasiliki Mamalis in Volos, Greece. Achilles was proceeded in death by his parents and his... View Obituary & Service Information

The family of Achilles George Tom Mamalis created this Life Tributes page to make it easy to share your memories.

Send flowers to the Mamalis family.