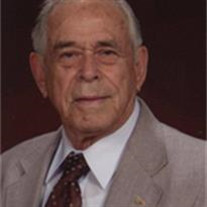 Albert Leroy Hemphill, 86, passed away Sunday, February 20th, 2011. Albert Hemphill, son, brother, husband, father, grandfather, and friend was the 7th child of Ralph and Mary Hemphill, born February 6th, 1925, near Tryon, OK and educated in the Tryon Schools. He was active in the 4H Clubs, working with local farmers with terraces on their land. He bought livestock and prepared them for show at various livestock shows. He served as president of the Lincoln County 4H Club, and was active in the schools athletic programs, basketball and tennis. After graduation, he joined the Merchant Marines and served in both the Pacific theatre and Atlantic theatre. As with nearly all the serviceman during World War II, he experienced several close calls but considered himself most fortunate to survive those years. When he returned in June, 1946, his parents had moved to Stillwater, where he met Donna and they were married a year later. While working in the construction industry in Stillwater, he came to know Jack Thomas and later joined him in Tulsa, building residential and commercial building until retirement in 1986. In the 1950â??s, three sons, Bill, Lloyd, and Arlen came into their family. Albert and Donna became active in the childrenâ??s program at Wheeling Avenue Christian Church. He built equipment for the preschool department and they taught the kindergarten children there for eleven years. At this time, they both became active in the Boy Scouting program, both Cub Scouts and Boy Scouts. All three of their boys and many others in the troops achieved Eagle Scout; Bill also received the God and Country award. Albert was awarded the Silver Beaver. He participated in adult leader training program after he was no longer involved in the local troop. In 1973, they moved to the Bixby/Broken Arrow area and worshiped at Bixby, then later moved their membership to Yale Avenue Christian Church, again using his building skills in needed areas of the church. After their retirement, Albert and Donna bought an RV and began camping with a chapter of the Good Sam Club and also traveled on their own. They were able to see the lower 48 states and parts of Canada while visiting family and friends and sight seeing. His hobbies were creating beautiful things from various woods, gardening, and doing whatever he could to make someoneâ??s life better. Albert has said that God has blessed him with a wonderful loving family which includes the boys, their wives, six grandchildren, four great-grandchildren and twentytwo nieces and nephews, as well as many friends and co-workers. He was particularly interested in the young people of all ages and the effect his actions would have on their lives. He is predeceased by parents, Ralph and Mary Hemphill, two brothers, Elizie and Floyd Hemphill, and four sisters, Velma Matthews, Zola Jones, Lola Scott, and Irene Farrow. He is survived by wife Donna of 63 years, sons: Bill (Ruth) of Tampa, FL, Lloyd (Sherry) of Broken Arrow, and Arlen (Helen) of Bixby, six grandchildren, and four great-grandchildren. Visitation is planned for Thursday evening at the Floral Haven Funeral Home in Broken Arrow with burial on Friday morning and a memorial service at Yale Avenue Christian Church following the burial.

The family of Albert Leroy Hemphill created this Life Tributes page to make it easy to share your memories.