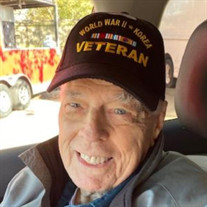 Albert Wayne Miller was born June 3, 1927, in Ventura, California to Anthony Wayne and Irene Dugan Miller. He died on March 22, 2022, after a 10+ year battle with cancer. Albert was the oldest of three children. He was preceded in death by his parents, brother Sam of Ventura, California, and sister Rosalie of Ojai, California. He is survived by his wife of 68 years Joyce Ratliff Miller, sons Alan and wife Brenda Miller of Broken Arrow, Oklahoma; Joel Miller of Plano, Texas; Nathan and wife Monique Miller of McKinney TX, Texas, and daughter Amy Miller Lynaugh and husband Peter of Frisco, Texas. Additionally, Albert is survived by grandchildren Wynn and wife Laura Miller; Hailey Miller; Philip and wife Amanda Miller; Wyatt Miller; Blake Hanson; Shaylyn Hanson; Alyssa Hanson; Sergeant Aidan Hanson, Sophia Miller; and Madeline Miller. Albert’s great-grandchildren include Adrian, Kendal, Audri, Hadassah, Josiah, and Everly. Albert is also survived by sister-in-law Donna Miller of Ventura, California, and many nieces and nephews. Albert grew up in the Ventura and Santa Barbara County area of California during the Great Depression. He remembered those times being very difficult but said they were good times. In 1943 at the age of 17, and before graduating from high school, he volunteered for service in the US Army and was assigned to the 7th Infantry Division Field Artillery and deployed to the Pacific theater in Okinawa, The Philippines, and post-war Japan. Asked later, “Why did you volunteer?”, he responded, “It was the right thing to do.” He was later deployed to Korea where he served with his brother Sam. He received a field commission to Lieutenant and later became Captain. He continued to stay in the National Guard 40th Armored Division and retired as a Major. After returning home from the wars, Albert completed his GED, two years of college, and found employment at Sears, Roebuck, and Co. where he met his wife, Joyce. In January 1953 he went to work for the Ventura County Sheriff’s Department as a deputy. Albert and Joyce dated for over a year and were married on February 13, 1954. They settled in Ventura, California where Alan and Joel were born. Albert and his family later moved to Ojai, California where twins Nathan and Amy were born. A lifetime public servant, Albert retired from the Ventura County Sheriff’s Department in March 1985 after a distinguished career of 32 years, which included, Sheriff Academy Operations, Helicopter Search and Rescue Program, Crime and Internal Affairs, graduating from both California Lutheran University with his BS degree in Administration of Justice and the National FBI Academy, just to mention a few. Albert and Joyce moved to Broken Arrow, Oklahoma in April 1997. An avid student of history, Albert found his passion in researching family genealogy along with his wife Joyce. He treasured family vacations, traveling across the country, often visiting Washington DC, Oklahoma, and any place of history or with ties to family genealogy. He enjoyed watching his grandchildren play sports and building anything of wood in his barn. He loved firearms, pecan pie, Braum’s chocolate shakes, WWII movies, Laurel and Hardy comedies and (anything that made him laugh), a good western movie, a solid day’s work, big bands, Eddie Arnold and Marty Robbins music. Albert will be remembered by this statement: “There are three things very dear to me: my family, my country, and my God. These are worth fighting for.”

Albert Wayne Miller was born June 3, 1927, in Ventura, California to Anthony Wayne and Irene Dugan Miller. He died on March 22, 2022, after a 10+ year battle with cancer. Albert was the oldest of three children. He was preceded in death by his... View Obituary & Service Information

The family of Albert Wayne Miller created this Life Tributes page to make it easy to share your memories.

Send flowers to the Miller family.