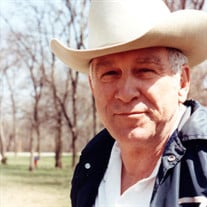 Albert Roy Roby, 88 of Tulsa, Oklahoma passed from this life on Wednesday, April 29, 2020 one day prior to his 89 birthday. He peacefully passed at his residence with family by his side. He was born April 30, 1931 in Sapulpa, Oklahoma to his parents, Lee Roby and Mary Lucille Strain Roby. In 1990 he married Peggy Stottlemyre Whittenburg and they shared in over 30 wonderful years together. Albert was a loving man that never met a stranger. His family and grandkids meant the most to him. Albert worked for Southwestern Bell as a switchman and retired after 30 years. He proudly served in the United States Air Force serving his country. He loved fishing, camping (some camping stays lasted several days and even weeks), dancing, watching sports, walking, doing yard work and he just loved to piddle. He and Peggy attended St. Mark's United Methodist Church. Albert is survived by his loving wife, Peggy Roby of the home; four children, Saundra Garrison and husband Vance of Collinsville, Oklahoma, Sharon McCleary of Tulsa, Oklahoma, Libby Bohr and husband Greg of Independence, Kansas and Nolen Whittenburg, Jr. of Sand Springs, Oklahoma; one sister, Mary Lee Richards of Houston, Texas; ten grandchildren, Sara Henderson and husband Gary, Carol Negelein, Jason Negelein and husband Ray Hutton, Kristy Doshier and husband Gustavo Weisterhiedy, Justin Doshier, Jennifer Jimison, Lauren Wright and husband Harry, Kali Jimison, Kyle Jimison and Ryan Jimison, Jill Grider and husband Mike, Paul Whittenburg and wife Hannah, Hailee Whittenburg; 8 great-grandchildren; and many, many friends and extended family members. He was preceded in death by his parents; sons, Gary Lynn Roby and Michael Whittenburg; brother, Don Roby; and sister, Jean Wyatt. A Celebration of Life will be held at a later date once all restrictions have been lifted. In lieu of flowers, memorials may be made to "Make A Wish", St. Jude Children's Hospital, or the American Diabetes Association in Albert's honor.

Albert Roy Roby, 88 of Tulsa, Oklahoma passed from this life on Wednesday, April 29, 2020 one day prior to his 89 birthday. He peacefully passed at his residence with family by his side. He was born April 30, 1931 in Sapulpa, Oklahoma to his... View Obituary & Service Information

The family of Albert R Roby created this Life Tributes page to make it easy to share your memories.

Albert Roy Roby, 88 of Tulsa, Oklahoma passed from this life...

Send flowers to the Roby family.