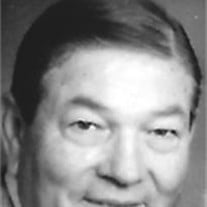 SHARP – Alexander, Jr., was born on March 22, 1920, in Comanche, OK to Alexander and Amy Sharp, who came to America from Scotland. The family moved to Henryetta, OK where Alex graduated from Henryetta High School. An outstanding athlete, he played fullback and place kicker for the Henryetta Hens, going on to play for Oklahoma A&M University, where an injury cut short his football career. He served in WWII in the U.S. Army Air Corp, 515 Service Squadron, stationed in White Horse, Alaska. He had a life-long passion for aviation and flying, particularly vintage aircraft. He celebrated his 80th birthday with a flight in a WWII Warbird fighter-pilot trainer. Mr. Sharp married his high school sweetheart, Minnette J. Thompson, and they had 3 children, son Glenn, and 2 daughters, Phyllis and Sandra. The family made their home in Tulsa in 1948, and the children attended Tulsa schools, graduating from Tulsa Central High School. When his daughters became interested in girls softball, Alex coached their team, the Springdale Tomboys, in league and tournament play over several years, where they garnered numerous awards and trophies. He also was active in coaching little league baseball, and was a Boy Scouts of America and Explorer Scout Troop Leader. Alex had a successful career as a draftsman, estimator, engineer, and salesman for Braden Steel Corporation, and later, Insulation Services, Inc., and Transco Supply Company. He enjoyed the corporate team sports, and was active on the softball and bowling teams. He was an avid sport fisherman and that became his major hobby in retirement. He was proud of his Scottish heritage and loved to attend the Scottish Games in Tulsa. Few people are lucky enough to find one true love in their lifetime, but Alex was fortunate to have two. Alex married Joy Street in 1978, and they recently celebrated their 30th wedding anniversary. In retirement, they have enjoyed travel, home improvement projects, and have fished from Mexico, to Canada, to Alaska. They have been very active in the Tulsa Pairs and Squares square dance club, serving as officers, including President and Treasurer for several years. Alex enjoyed participating in the weekly breakfast meeting of the Tulsa Chapter of the Henryetta Hens. Mr. Sharp is survived by: his wife, Joy, of the home in Glenpool; daughter, Phyllis J. Sharp of Branson, MO; and son, Glenn A. Sharp and his wife Polly, of Grove, OK; and son-in-law, Tom Cloy of Purdon, TX. Also surviving are granddaughters, Jennifer Kauffman and her husband, Jeff, of Tulsa, Mandy Economous and her husband, Nicholas, of Cleveland, OH; close family friend, Becky Smith, of Branson, MO; and 3 great-grandchildren, Sam and Nora Kauffman, and Zoe Economous. He is also survived by his step-son, Arthur Street, and his wife, Terri, of Coweta, OK; their children, Tommy, Tabatha, and Jeremy Street, Jennifer Fouch, and Tiffany Haley and her husband Scott. Also surviving are step-great-grandchildren, Shelby and McKenzie Fouch. Alex was preceded in death by his parents, Alexander and Amy Sharp; wife, Minnette Sharp; brothers, Melvin, Kenneth, and William Sharp; sister, Nadine Johnson; and daughter, Sandra Sharp Cloy. Service will be held, Tuesday, September 23, 2008, at the Floral Haven Funeral Home Chapel, 6500 S. 129th E. Ave., Broken Arrow, OK. (918)252-2518. Gifted with a sense of humor that ingratiated him to everyone he met. Alex never met a stranger, and he will be missed by all who knew him. Alexander Sharp, Jr.Survived By:

SHARP &#8211; Alexander, Jr., was born on March 22, 1920, in Comanche, OK to Alexander and Amy Sharp, who came to America from Scotland. The family moved to Henryetta, OK where Alex graduated from Henryetta High School. An outstanding athlete,... View Obituary & Service Information

The family of Alexander Sharp created this Life Tributes page to make it easy to share your memories.