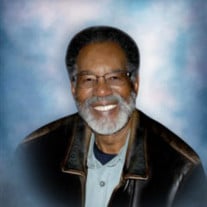 Alfred “Al” Douglas Benjamin was born July 15, 1936 in Eufaula, Oklahoma. His parents, Ola Mae Benjamin and James Martin, preceded him in death. Al is survived by his wife of 33 years, Sunny. Also daughters Jackie, Fran, Gail; sons Ronnie, Chris, AD Jr., Ethan, Bruce, Michael and Joshua;  20 grandchildren and 19 great grandchildren.After 28 years Al retired from ATT/Southwestern Bell and continued working in his own telecommunications company, ATS Telecom, for another 25 years. During the ‘80s and 90’s Al owned and operated Al’s Dance Studio, teaching Ballrooom, Swing, Latin and Country Dancing to hundreds of students both in his studio and as an instructor for Tulsa Community College.Al chose to make God the center of his life and God gave him a servant’s heart. Until illness limited his activities Al was active in church and served in various capacities such as senior elder, head usher, and deacon. Along with his wife, Sunny, he volunteered  for many years in marital and pre-marital counseling ministries. His compassion and love for people was obvious.A gifted athlete, Al had many interests including basketball, golf, fishing and cycling. He was happiest when he could share these experiences with his family.  Walking with his dogs, Carley and Ginger, was one of his delights, and having his little dog, Star, curled up on his lap brought a lot of joy and comfort during his extended illness.Visitation will be held from 10:00 a.m. to 8:00 p.m. on Thursday, November 7, 2019 at Floral Haven Funeral Home.  Services will be held at 2:00 p.m. on Friday, November 8, 2019 at Floral Haven’s Rose Chapel with Rev. Rick Davis officiating.

The family of Alfred Benjamin, Sr. created this Life Tributes page to make it easy to share your memories.