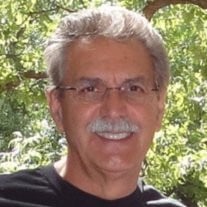 Alfred J. Byer, loving husband and father, passed away peacefully in his home in Tulsa, surrounded by family, on March 22, 2013 at age 68. He was born Alfons Pichler in Munich, Germany, to Michael and Maria Pichler on January 29, 1945. He was the youngest of six children. His father worked in a munitions plant in Munich during WWII under unhealthy conditions and passed away in 1956. In December, 1958, at age 13, Alfons immigrated with his mother to the United States to live with his sister, Maria Partala, and her family in Ft. Lauderdale, Florida. In 1961, the two families moved to New Jersey, where he graduated from Lakewood High School in 1963. During high school, he worked in an architectural firm and, in his free time, helped his sisterâ??s family build their home. Both activities inspired his love of design and construction. On January 8, 1965 he became a naturalized US citizen and changed his name to Alfred Joseph Byer. On January 8, 1968, he married Judith Hetenyi, and they had two daughters, Jill and Claudine. He worked in New York City at McKinley Architects and, in 1975, moved his family to Oklahoma City to work at McKinleyâ??s Oklahoma office. In 1979, he moved again with McKinley to Tulsa where he worked on the American Airlines Computer Center. Al was the project architect or was in charge of construction administration on many large, notable projects. He worked for Williams & Kelley Architects and for BSW Architects. Projects Alfred worked on at BSW include Wal-Martâ??s Hypermart stores and Marriott Residence Inn. He worked with architect Diane Houston at the firm. They fell in love and married on January 12, 1990, and he became a second father to her children, Sean and Tiffany. He worked at Benham, HTB Architects, and Gary Sparks Companies. Some of the projects he was involved in include OSUâ??s Willard Hall Renovation, Union Public Schoolsâ?? UMAC, TUâ??s Reynolds Center, and the renovation and expansion of OSUâ??s Gallagher-Iba Arena. In 2002, he again worked with his wife Diane when he joined Program Management Group as Senior Program Manager. He provided program oversight for Community Action Project and many projects for Bank of Oklahoma. As projects in Tulsa Countyâ??s bond programs â??4-to-Fixâ? the County, â??4-to-Fixâ? II and Vision2025 began, he provided oversight for such projects as the Oklahoma Jazz Hall of Fame, the BOK Center, OSU-Tulsaâ??s ATRC, many of the Downtowns & Neighborhoods projects, all Tulsa County Parks projects, the Jenks/Glenpool Community Center and LaFortune Community Center at LaFortune Park. He was a member of the American Institute of Architects and the Construction Specifications Institute, where he served as President. Alfred retired from Program Management Group in October, 2011, and soon afterward traveled back to his beloved Bavaria, Germany with Diane. He will be greatly missed by all those who knew and loved him. Alfred was preceded in death by his parents; brothers Joseph Hemauer, Wilhelm Pichler and Ernst Pichler; brother-in-law and father figure Peter Partala, and niece Luba Partala. Surviving are his wife Diane, his daughters Jill Day and Claudine Winders and her husband Dan; step-son Sean Houston, step-daughter Tiffany Houston; grandchildren Zackery James, Kathryn Day and Sarah Winders. Also surviving are his sister Maria Partala, brother Michael Pichler and his wife Frieda, nieces and nephews Linda Bonfilio and her husband Bob, Eugene Partala, Alexander Partala and Maria Partala, and great-nephew John Bonfilio. A celebration of his life will be held at 11:00 a.m. on Saturday, April 6, 2013 at Five Oaks Lodge in Jenks, OK. Those who wish may make a donation to Habitat for Humanity or the ASPCA, or rescue a stray cat. www.FiveOaksLodge.com for more information.

Alfred J. Byer, loving husband and father, passed away peacefully in his home in Tulsa, surrounded by family, on March 22, 2013 at age 68. He was born Alfons Pichler in Munich, Germany, to Michael and Maria Pichler on January 29, 1945. He... View Obituary & Service Information

The family of Alfred Joseph Byer created this Life Tributes page to make it easy to share your memories.