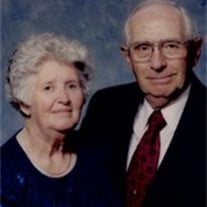 William Dale and Alice Jane Schultz 1925-2009 William Dale and Alice Jane Schultz of Catoosa, Oklahoma died in an auto accident on Wednesday, March 25, 2009. Husband and wife of 62 years, they passed within hours of each other. Dale was born on January 25, 1925 in Lenapah, Oklahoma. Jane was born on March 1, 1925 in Coffeyville, Kansas. Dale was a retired tooling engineer supervisor at Rockwell-Boeing and Jane was a homemaker. Both 84 years old, they were thoroughly enjoying retirement, having traveled for many years to favorite fishing and camping areas. Dale was an avid hunter, bass fisherman, gunsmith, knife craftsman and community go-to man for fixing, building, repairing, rebuilding, maintaining literally anything presented to him. He was a genius when it came to anything mechanical. Jane loved her fishing and was always active with their garden, her backyard birds and critters, reading, the Arts, and supporting Dale’s numerous adventures. Together they raised 5 children.Â  Having contributed so selflessly to so many others, whether their neighbors, fellow veterans, old school mates, or near strangers, and most importantly their families, Dale and Jane will be and already are immensely missed. Dale and Jane both are survived by their children: Katherine Lopez of Glenwood, Hawaii; Karen Lawson of Citrus Heights, California; Carolyn Schultz of Longwood, Florida; James Schultz of Bothell, Washington; and Rosemary Schultz of Millington, Tennessee. Grandchildren are Robin Lancon, Louis Lopez, Christine McFarland, Patrick Lopez, Angel Babcock, Zoey Carr, Sophia Schultz, and Alexandria Schultz. They have six Great-grandchildren and numerous nieces and nephews. A rosary will be held at 7 P.M., Wednesday, April 1, 2009 and Funeral Services at 12:30 P.M., Thursday, April 2, 2009 both at Floral Haven Funeral Home Chapel, Broken Arrow, Oklahoma. Interment will follow at the Mount Washington Cemetery in Lenapah, Oklahoma.

The family of Alice “Jane” Schultz created this Life Tributes page to make it easy to share your memories.