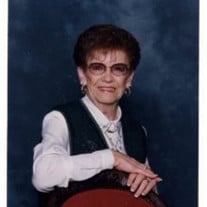 Alma fell in love at the young age of 16 and quit school after ninth grade to marry her one true love, Ernest Burl Barnes on December 24th, 1946. Times were hard in the early years, but she believed in God’s plan. Alma had a big personality and loved people. You rarely saw her without a smile. She loved gardening, golfing, vacationing, cruising and doing anything with family and friends. She was a great storyteller and she loved telling jokes. Alma is preceded in death by her husband Burl, son Ernest Neil Barnes, one granddaughter, and one great-great granddaughter. They were blessed with four children, Neil and wife Sue, Jim and wife Shirley, Cheryl and husband Horace “Hoss”, and Mark and wife Christie, plus a plethora of grandchildren, great grandchildren, and great-great grandchildren totaling twenty-two.Alma was born September 22, 1930 to Albert and Myrtle Clem in Sallisaw, Oklahoma, and passed away December 20, 2019. She went to school in Vian, Oklahoma where her parents owned a “five and dime” store and restaurant. She attended Draughon’s Business College, American Institute of Banking and many financial courses at OSU and OU.She worked for a group of bank investors in excess of 38 years in various management positions. She served on the Board of Directors of Guaranty National Bank, Security Bank, and retired as President, CEO and Chairman of the Board at the Bank of Catoosa. Unlike the corporate world of today, she banked on a first name basis basing decisions on the “feeling” of the person and sealed it with a handshake. Her feel of people was always right. She was awarded the High-Performance Award from Bank Administration Institute in recognition of having the most solvent Bank in Oklahoma for five straight years.Alma served in many civic activities such as Chairman and Director of Rogers State University, Adult Education Board for Tulsa Vo-Tech, President of the Women’s Division of Oklahoma Bankers Association, Director of Catoosa Chamber of Commerce, and Roger County Development Association. Once retired, she worked with FEMA and the American Red Cross volunteering selfless hours for two plus years in helping residents and businesses in Catoosa rebuild their homes and lives after the devastating tornado in April 1993.There will be a Memorial Service January 3oth, 2020 at 12:30pm in the main Chapel at Floral Haven Funeral Home, Broken Arrow, Oklahoma.In lieu of flowers, her children ask that donations in their mother’s name, Alma Barnes, be made to the Alzheimer’s Association to fight this horrific disease and to accelerate research.

Alma fell in love at the young age of 16 and quit school after ninth grade to marry her one true love, Ernest Burl Barnes on December 24th, 1946. Times were hard in the early years, but she believed in God&#8217;s plan. Alma had a big personality... View Obituary & Service Information

The family of Alma Nellie Barnes created this Life Tributes page to make it easy to share your memories.

Alma fell in love at the young age of 16 and quit school after...