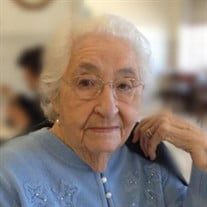 Alma Lambert Robertson Pruitt passed away in her home, surrounded by family, on Monday, October 25th, 2021. Born August 11, 1922 in her family home in Clarksville, Arkansas. She served in WWII in the Women’s Army Corps (WAC) stationed in Germany and France as a Teletype Operator. After the war, she attended Tulsa Business College where she met and married Robert Eugene Robertson in 1947. Bob ran Contractors Electric in Muskogee and later B & D Electric. Alma kept the books for the business. They raised 4 children together: Jane McIntosh, Bobby Rhyne (Gary), Paula Woods (Larry) and David Robertson (Gail); who gave them 10 grandchildren: Mindy Ellis (Doug), Nicole McIntosh (Chris), Shannon Melot (Mike), Dani Tedder, Jennifer McIntosh (Leslie), Kacey White, Zachary Rhyne (Jaime), Elissa Steinke (Derek), Lindsey Robertson and Joshua Robertson; 11 great-grandchildren; and 6 great-great-grandchildren. During Bob’s illness, Alma got her driver’s license (for the first time) and started working for Big 4 Auto Supply as a Bookkeeper. She worked there until her retirement. While she was there she met a lifelong friend and “bonus daughter” Sherry. In 1989, she married James C. Pruitt. They loved to travel together all over the US in their 5th wheel. They would travel for months at a time and Alma would cook and bake just like she was at home. They would plan a 3 week trip and 2 months later they would still be on the road, meeting friends and family all over the US. Alma was preceded in death by both Robert “Bob” Robertson and James “Jay” Pruitt, her Sister Avol and Brother Leon. She recently celebrated her 99th Birthday surrounded by family and friends. She loved to travel, spend time with family, camping and feeding people. She was always welcoming to others in her home and will be greatly missed by all who knew her. One from “The Greatest Generation”, her steadfastness to life and all of its challenges, her seemingly endless experiences, her unwavering kindness and love to all, will always shape and be a part of those of us fortunate enough to have known and loved her and passed on in stories to the new generation that did not.

Alma Lambert Robertson Pruitt passed away in her home, surrounded by family, on Monday, October 25th, 2021. Born August 11, 1922 in her family home in Clarksville, Arkansas. She served in WWII in the Women&#8217;s Army Corps (WAC) stationed... View Obituary & Service Information

The family of Alma Lambert Pruitt created this Life Tributes page to make it easy to share your memories.

Alma Lambert Robertson Pruitt passed away in her home, surrounded...

Send flowers to the Pruitt family.