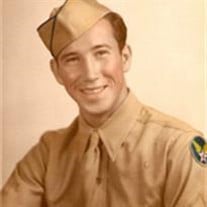 Alvin Lee Smith, 91, went to be with the Lord, on Monday, November 12, at the Tulsa Jewish Retirement and Health Center, in Tulsa.Alvin was born on October 28, 1921, in Coffeyville, KS, to Albert and Gertrude Smith.Â He grew up in the Carbondale community and attended Alice Robertson Elementary School and Clinton Junior High.Â Alvin was a member of the first graduating class in 1939, from Daniel Webster High School in Tulsa.Â He also attended several Air Force schools and graduated from Spartan School of Aeronautics, earning his Airframe and Powerplant license ratings from the Federal Aviation Administration.Â  Alvin worked for 43 years at the American Airlines maintenance facility in Tulsa and was a member of the Transport Workers Union.Â  Alvin spent most of his life living in Southwest Tulsa.Â In his youngerÂ years he loved to coach little league baseball with the Robertson Cubs contending for the city championship on more than one occasion.Â Â  Many of those he coached, played on the 1969 Daniel Webster State Champion baseball team.Â  In later years Alvin enjoyed fishing and spending time with family at their get away at Strayhorn Cove on Lake Tenkiller.Â  During World War II, Alvin served with the 15th Air Force, serving in both Africa and Italy.Â Many hours were spent in all kinds of weather and conditions keeping the B-17 Flying Fortresses in the air.Â It was in the Air Force that Alvin met his lifelong friend, Bill Wood, of Moore, OK.Â  Alvin is survived by his spouse,Â Jacquelyn, of the home.Â They were married on February 2, 1946, and have been married 66 years.Â  He is also survived by his daughter, Cheryl Walker, of Tulsa, and a son,Â Alan Smith and his wife Jamie, of Broken Arrow.Â He was very recently preceded in death by his son-in-law, Don Walker.Â  Alvin has six grandchildren, Kim Walker of Tulsa, Robert Walker, of Lewisville, TX.Â Amos Smith of San Diego, CA, Glory Police of Broken Arrow,Â Eli Smith, of Tulsa and Parker Walker of Tulsa.Â He was preceded in death by his granddaughter, Jacquelyn.Â  He is also survived by six great-grandchildren.Â Micah Griffin of Skiatook, Matt Police,Â Andrew Police, and Alicia Police, all of Broken Arrow.Â And, Colin Walker and Hagan Walker, both of Lewisville, TX, and Autumn Smith and Daniel Smith, of San Diego, CA.Â  Johnny Smith of Liberty, MO, is Alvinâ??s surviving brother.Â Alvin was preceded in death by his mother and father, and his sister, Ruth.Â  Alvin is also survived by many loving in-laws, nieces and nephews, and lifelong friends. Â Funeral services are slated for Thursday, 12:30 p.m., at Floral Haven Chapel, with graveside military honors followingÂ at Floral Haven Cemetery.Â Â  A reception will be held from 2 â?? 4 p.m. at the Floral Haven Family Center, 6500 South 129th East Avenue, Broken Arrow, OK.Â  Memorial donation suggestions are the Alzheimerâ??s Foundation and the Tulsa Jewish Retirement and Health Center.Â  A special thanks to Miller Hospice and their staff.Alvinâ??s favorite passage from the Word of God is from Ephesians 2:8, for by Grace ye are saved through faith.

Alvin Lee Smith, 91, went to be with the Lord, on Monday, November 12, at the Tulsa Jewish Retirement and Health Center, in Tulsa.Alvin was born on October 28, 1921, in Coffeyville, KS, to Albert and Gertrude Smith.Â He grew up in the Carbondale... View Obituary & Service Information

The family of Alvin L. Smith created this Life Tributes page to make it easy to share your memories.