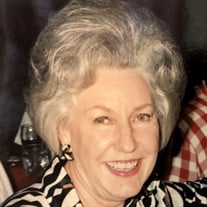 Amelia M. Woodward, 11/17/34 - 02-19-21 Amelia Woodward, a Tulsa resident since 1957, left this Earth late Thursday night after a two year battle with cancer. She was 86 years old. Born in Arlington, Texas, Amelia was the third child of Mr. and Mrs. Mathias Merritt (May Williams) of Arlington. She attended Arlington High where she was a cheerleader, majorette and honor student. She studied piano for 12 years and had a lifelong love of music and the arts. Amelia attended the University of Texas in Austin where she was a member of the Kappa Alpha Theta Sorority, making many lifelong friendships there. She earned a Bachelor of Arts degree in English Literature then worked in Dallas for Delta Airlines as a stewardess. In 1957 Amelia married another Arlington High graduate, Coulter Lee Woodward. She and “Woody,” as she liked to call Lee, moved to Tulsa where he had accepted a position with KOTV, Channel 6 as a booth announcer and host of the Sunup morning show. Amelia worked as a bridal consultant at the downtown Vandever’s Department Store, resigning after four years to become a full time mother. If asked, Amelia would say her greatest achievement was “giving birth to and raising” her three children. A lifelong learner and voracious reader, Amelia began every day with coffee and the Tulsa World and read the Tulsa Tribune as well when it was in circulation. She was a volunteer, certified Great Books discussion leader and, in addition to her Adult Great Books discussion group, led many junior high and high school students at Edison through volumes of poetry and short stories. Amelia was a woman of endless curiosity about the natural world. She loved feeding and watching birds and had a knack for attracting and caring for stray animals, adopting some and finding homes for others. She also loved playing bridge and watching football, especially the Dallas Cowboys, Texas Longhorns, the Sooners and the Cowboys. Oh, and don’t forget Tom Brady! Known as a great “southern cook,” there were never leftovers of her fried chicken and cream gravy, meatloaf, pot roast, tuna casserole, or drip beef. When all three of her children were grown, Amelia went back to work; first at Nielsen’s in Southroads Mall and then at Miss Jackson’s in Utica Square, retiring when she was 66. She loved assisting her patrons. Most of all, Amelia loved her neighbors on Darlington Avenue, forging lifelong friendships with many of those who lived around her. Amelia was preceded in death by her brothers Kenneth and Leslie Merritt, her husband, Lee Woodward, and son-in-law, Brad Naifeh of Oklahoma City. She is survived by her oldest son, Stanley M. Woodward of Dallas, his wife, Judy, and granddaughters Grace and Stephanie; daughter, Valerie Naifeh of Oklahoma City, granddaughter Leigh Naifeh of OKC and step-grandaughter Mrs. Kyle (Megan) Fleischfresser of OKC and great-granddaughters Agnes and Ida, and youngest son Matthew Woodward, of Las Vegas, Nevada. The family is very grateful for the Darlington Avenue neighbors who were always there to talk or lend Amelia a helping hand after Lee’s death and for the tender, respectful love and friendship of caregivers Kim Robertson and Ruby McFadden. In lieu of flowers, please consider making a donation to the Tulsa City-County Library, the Susan G. Komen Foundation or the area Hospice provider of your choice.

Amelia M. Woodward, 11/17/34 - 02-19-21 Amelia Woodward, a Tulsa resident since 1957, left this Earth late Thursday night after a two year battle with cancer. She was 86 years old. Born in Arlington, Texas, Amelia was the third child of... View Obituary & Service Information

The family of Amelia M. Woodward created this Life Tributes page to make it easy to share your memories.

Send flowers to the Woodward family.