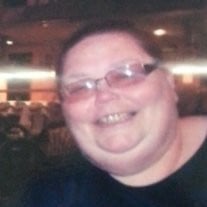 Anita Lee (Massey) LewisOn the morning of December 16, 2013 Anita left this world to join her heavenly father. Anita was 56 years old. Anita Lewis was born on October 18th, 1957 in Tulsa Oklahoma at Oklahoma Osteopathic Hospital. She was the third child of Leonard and Jean Massey.She was a seamstress at Massey’s Trim shop where she worked with her husband Tim Lewis working on a variety of car interiors and never met a person she didn’t like. She was a very caring woman who would give someone the shirt off her back if she thought they would like it. Her Mother said she had the best personality, was generous, warm, and extremely caring, and feels she is the greatest person she knows. Her sister said she had a laugh you couldn’t forget, and she never met a stranger. Anita lived her life much like her father Leonard and would share in his belief ofDo not stand at my grave and weep; I am not there; I do not sleep. I am a thousand winds that blow; I am the diamond glints on snow; I am the sunlight on ripened grain; I am the gentle autumn rain. When you awaken in the morning’s hush, I am the swift uplifting rush Of quiet birds in circled flight. I am the soft star that shines at night. Do not stand at my grave and cry; I am not there; I did not die.Anita was preceded in death by her father Leonard and her sister Lenny. Anita is survived by her mother Jean Massey, her husband Tim Lewis, her (3) daughters Christina Meier, Candy Ezell, and Canaa Campbell, her (3) sons Timmy, Jeff, and Robert; her (12) grandkids Ryan, Sean Patrick, Damien, Kirsten, Kerridwyn, Anastasia, Sabrina, Jordan, Gavin, Jamila, Samara, and Annie, her (1) great grand-son Levi; her sister Veta McCoy, and her (2) nieces Alica and Lisa. Anita was a loving wife, mother, grandmother, great grandmother, sister, and aunt. She will truly be missed.There will not be a funeral service. There will be a memorial on 12/20/2013 @ 3p until 7p at her Mother’s house. If you would like to send flowers or a memorial gift please send them to 546 S. Lakewood Avenue, Tulsa Ok 74112.

The family of Anita Lee Lewis created this Life Tributes page to make it easy to share your memories.