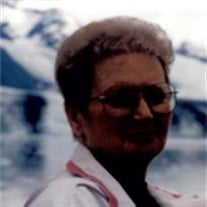 Anita Kay Souter October 6, 1940 â?? February 17, 2011 Â Anita Kay Souter lived 70 plus years on Godâ??s earth. She passed in her sleep on Thursday, February 17, 2011, at home in Tulsa, Oklahoma. Â Anita was born on October 6, 1940 in Parsons, Kansas, to William and Loie Souter. She was the only girl, sharing her life with brothers, Geary, Richard, Max, Kenneth and Jack. She attended elementary school in Parsons, Kansas and moved with her mother and brothers, Geary and Richard, to Tulsa in 1958, where she attended and graduated from Central High School. Â She enjoyed a long career with Skaggs/Albertsonâ??s, where she managed the front-end, customer service areas. She enjoyed cooking, crocheting, traveling, spending time with family and shopping on QVC. She particularly enjoyed spending time with all the â??little peopleâ? in the family. Her children were all of the children in the family. Spoiling them in her own special way brought her great joy. Â She remained in Tulsa and lived with her mother, Loie, until Loieâ??s passing in February 1996. At that time, she moved to Spokane, Washington, where she lived near other family members for 8 years. Returning to Tulsa in 2004, she chose to reside in the old neighborhood, where she lived one block away from her prior home. She remained in north Tulsa until her passing. Â Anita was raised attending church and called Memorial Drive Church of Christ her church home. When her health allowed, she enjoyed attending Tuesday morning ladies bible study, Sunday morning ladies class, services and small group. She placed her faith in God and confessed her faith through words and obedience in baptism. Â â??Kinda oneryâ? would be a good description of Anitaâ??s quick wit and sense of humor. She was so good at delivering a line with a straight face that if you didnâ??t know her, you might think she was serious! She could banter with the best and enjoyed the big laughs that came at the end of those exchanges. Â Anita is survived by two sisters-in-law, Theola Souter, of the home, and Peggy Souter of Tulsa. She is also survived by 2 nephews, 4 nieces, 13 grand nephews and nieces and 4 great-grand nephews and nieces. Â She was preceded in death by her mother, Loie (1996); her brothers, Richard (1988); Geary (2009); Max, Kenneth and Jack and her nephew, David (2006). Â Visitation will be Monday, February 21, 2011 from 10 am to 9 pm. Services will be held Tuesday, February 22, 2011, in the chapel at Floral Haven in Tulsa, Oklahoma with Terry Rush officiating. The Memorial Drive Praise Team will share a couple of Anitaâ??s favorite songs. Service is scheduled to begin at 12:30 p.m. with graveside service to follow. Honorary poll bearers are Mike Souter of Ponca City and Rusty Souter of Tulsa. Â A light reception is planned following services at Memorial Drive Church of Christ in the Memorial Room. (Approximately 2:30 pm) Â The family wishes to express their thanks for all the prayers, kindness and love shown.

The family of Anita Kay Souter created this Life Tributes page to make it easy to share your memories.