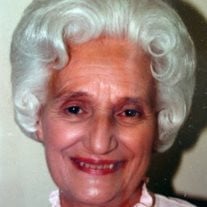 Anna C. Staggs, a long time resident of Tulsa, passed away on Friday Morning, January 10, 2014 at the age of 93. Anna was born on September 18, 1920 in Creek Mine Camp north of Henryetta, Oklahoma. Her family moved into Henryetta in 1925 where she grew up and graduated from St. Michael’s Catholic School in 1938. Anna graduated with an Associate Degree from Benedictine College in Guthrie, Oklahoma in 1940. During World War II she served on the United States Draft Board in Okmulgee County where she met her late husband, Marvin H. Staggs. They were married in October, 1945 and moved to Tulsa, Ok in 1946, where she resided until the time of her death. Anna served on the United States Draft Board again during the Vietnam War from 1963 to 1975. From 1975 to her retirement in 1984 she worked for the Social Security Administration. For more than 30 years Anna was associated with the Indian Nations Council, Boy Scouts of America, first as a Den Mother, and then as a volunteer. She and Marvin travelled to many scout jamborees and activities throughout the nation. She was awarded the highest adult Boy Scouts honor – the Silver Fawn Award. Since 1975 Anna has been a member of the Tulsa Rose Society. She served for twenty years as the editor of the society’s newsletter, the Roserian. She also served as secretary of the Sooner State Rose Society, South Central District Vice President, Horticulture and Arrangement Judge, and she travelled throughout the nation to judge roses at numerous shows. She was locally known for her beautiful rose arrangements; especially her miniatures and she won many awards and ribbons. In addition to her numerous awards, Anna was a Bronze Medal and a Silver Medal Award recipient of the American Rose Society.Anna is survived by her sons Joseph W. Staggs and wife Pat of Ijamsville, Maryland, Marvin L. Staggs and wife Kathy of Tulsa and Stanley D. Staggs of Tulsa. She is also survived by her grandsons Monty B. Staggs of Hoover, Alabama, Bradley Staggs of Tulsa, Ryan Staggs of Tahlequah, Todd Dafforn of Wichita, Kansas, James Bennett of New Market, Maryland, Lt. Col. Robert Bennett of Vicenza, Italy, and her grand-daughter Robin Dafforn of Chicago, Illinois. Anna is also survived by six great-grand sons and three great-grand daughters. A viewing will be held at Floral Haven Funeral Home from 10:00 AM to 8:00 PM Tuesday, January 14th. A Funeral service will be held at 10:00 AM Wednesday, January 15th at Floral Haven Funeral Home Chapel, 6500 S. 129th East Avenue, Broken Arrow, OK.

Anna C. Staggs, a long time resident of Tulsa, passed away on Friday Morning, January 10, 2014 at the age of 93. Anna was born on September 18, 1920 in Creek Mine Camp north of Henryetta, Oklahoma. Her family moved into Henryetta in 1925 where... View Obituary & Service Information

The family of Anna C. Staggs created this Life Tributes page to make it easy to share your memories.

Anna C. Staggs, a long time resident of Tulsa, passed away on...