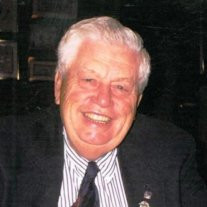 Mac Alloway was born in Turley, Oklahoma on February 4, 1924 to Henry and Laura Gladys Alloway. He was the grandson of Lloyd M. Boyer and Alice Pearl Boyer of Turley and Henry O. and Willaminna Alloway of Petersburg, Kentucky. In 1927 the Alloway’s moved to Rainbow Bend (Barnsdall) Oil Camp, near Winfield, Kansas. During summer months Mac and the Alloway children returned to Turley and Mac would work with his granddad milking cows and helping with his granddad’s oil wells. It was at an early age that he learned to do and enjoy hard work. He was an outstanding athlete (baseball and basketball) at Winfield High. Although the basketball team did not have tall players, “the Scats” were speedy and were able to win state championships. The entire team was awarded scholarships to Southwestern College in Winfield. Mac attended for several months, but World War II was declared and he felt it was his duty to serve his country. He joined the Marines in early 1943 and was selected to go to Sea School MCRD in San Diego, California. He was sent to Kiska, Alaska, and served on the USS New Mexico (BB-40), was involved in the Makin (Foraker) Operation, Saipan, Tinian and Guam invasions. He was next in the Battle of Leyte Gulf and in Okinawa, Japan. He was honorably discharged on December 7, 1945. He entered Oklahoma A&M (Oklahoma State) in January, 1946, transferred to Texas A&M in September 1947. He returned to Oklahoma A&M in June 1948 graduating with a business degree in January 1949. In March, 1949 he joined the Land Department of Gulf Oil Corporation in Tulsa. In September 1949 he started Law School at Tulsa University (evenings) but his education was put on hold since Gulf transferred him to Scotts Bluff, Nebraska in April, 1952. In February, 1953 he was transferred to Miles City, Montana and in January, 1954 Gulf transferred him to Billings, Montana. He worked as an oil & gas scout and landsman in a Gulf management training program, and was transferred to Denver, Colorado in July, 1955. In September, 1955, he entered Westminster College of Law (University of Denver), graduating in June, 1957 from the University of Denver, L. L. B. He joined Anschutz Drilling in Denver and served as President for a year during the 1950s. He practiced law in Denver and had a successful practice but returned to the business he loved, and founded Golden Oil Company in the 1970s serving as President. The Company was publicly traded with the original stock selling for 5 cents a share and through his efforts saw the stock price increase to over $5.00 a share. One of the last true “wildcatters”, he drilled a well in the now “South Dog Creek” field which was written up in the Tulsa World as one of the largest producing oil fields in over 40 years in Osage County, Oklahoma. Mac was present in the field on every well drilled and had a (producing success ratio of over 70% of the wells he drilled). The Osage Tribe has honored him several times. He along with other producers appears in a painting commissioned by the tribe that was displayed in an exhibit at the Tulsa International Airport. Mac left Golden Oil in the 1900s and became President and CEO of Tony Oil Company in Tulsa retiring in December, 2009. Mac had established a long and distinguished career in the energy industry. He was co-founder of the Marginal Well Commission, Member and /or Board Member of OIPA, Mid-Continent Oil & Gas Association, Osage Producers Association, and Chairman of The International Society of The Energy Advocates and was awarded Advocate of the year in 1999. A bronze bust of Mac was unveiled at a gala at the Summit Club in July, 2001. The Energy Advocates Library, Tulsa was named A.M. “Mac” Alloway Library and dedicated in December, 2005. Mac worked diligently to inspire up and coming industry leadership through his involvement in various organizations. One of the last “true” oilmen, Mac Alloway was well known for his fairness and straight forwardness by everyone who knew or did business with him. He made business trips to the U.K. and Alaska including Prudhoe Bay, on the Arctic Ocean. Mac enjoyed deep sea fishing winning tournaments off the coast of Palm Beach, Florida. He would find the time while working in Colorado, Montana, Wyoming and neighboring states to fish the wonderful lakes and streams. He fished the Alaskan rivers and New Zealand lakes. However, his special joy was helping children land the big ones in the Almont, Colorado area. Well liked, loved and widely respected, he will be missed by friends, family and acquaintances that had privilege to have known and worked with one of the prominent oil men in the oil and gas industry. Mac’s parents, sister Helen Jeanne Parks. Brother Rev. Henry O. Alloway, wife Virginia and brother John predeceased him. He is survived by his wife Annette, son Jon (from a former marriage), Theresa (wife of John), cousins, many nieces and nephews (including one great, great, great niece). The family thanks the Oasis Adult Day Care, St. Francis Hospice and Good Shepherd Hospice, and the Tulsa Jewish Health Care Center for their compassionate care. In lieu of flowers family and friends are contributing to Fellowship Lutheran Church Mission Endowment (flctulsa.org) 6727 S. Sheridan Road, Tulsa, OK 74133; Alzheimer’s Association, 2448 E. 81st St., Suite 3000, Tulsa, OK 74137; The International Society of Energy Advocates 320 S. Boston Ave., Tulsa, 74103 or a charity of choice. www.floralhaven.com A memorial service will be held on Saturday, December 7 at 11:00 a.m. at Fellowship Lutheran Church, 6727 S. Sheridan Road, Tulsa.

Mac Alloway was born in Turley, Oklahoma on February 4, 1924 to Henry and Laura Gladys Alloway. He was the grandson of Lloyd M. Boyer and Alice Pearl Boyer of Turley and Henry O. and Willaminna Alloway of Petersburg, Kentucky. In 1927 the Alloway&#8217;s... View Obituary & Service Information

The family of Arthur “Mac” McAlly Alloway created this Life Tributes page to make it easy to share your memories.