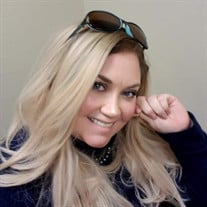 Ashley Anne Owens McClane passed from this life on Thursday, January 9, 2020 at the age of 41 years, 10 months, and 25 days after a hard-fought battle with Lupus. Ashley was born on February 15, 1978 to Jerry Richard Owens and Connie Sue (Lewis) Owens in Tulsa, Oklahoma. The family, along with many friends, has lost a remarkable human being. The youngest of five children, Ashley developed many passions including music, horses, and show jumping her horses. She had a sense of humor that could make anyone laugh with abandon. Ashley had a way of ensuring that the people around her knew that they were noticed and loved. Her love for people and for life will be sorely missed. A friend of Ashley’s described her perfectly by saying, “She had the ability to stretch out her arms and embrace the moment, actually feel the penetrating warmth of the sun, somehow be both rooted and free, happy and honest, seeing the darker pieces of life’s reality fully, transparently but oddly still optimistic and hopeful.” A graduate of Cleveland High School in 1996, Ashley was a classmate and student who was loved by all. Everyone not only knew her for her vibrant blue eyes, her Elizabeth Taylor-like features and the light that shined around her, but also for her angelic singing voice. After high school, Ashley attended college to obtain a degree in music. Ashley had many passions, but her greatest passion in life was being a mother to her son, Connor. Ashley is survived by her loving parents, Jerry and Connie Owens of Cleveland, OK; Her son, Connor William McClane of the home; brother Michael Owens and wife Angie of Flowermound, TX; brother Scott Owens and his wife Kacie of Broken Arrow, OK; sister Kristie Owens of Tulsa, OK; sister Shannon Owens Bellefleur and her husband Eddy of Broken Arrow, OK. She is also survived by her aunts Carol West of Nashoba, OK and Jonna Lewis of Tulsa, OK; six cousins, nine nieces, six nephews, five great-nieces, and three great-nephews. Ashley was preceded in death by her maternal grandparents, Victor and Virginia Lewis of Tulsa, OK; paternal grandparents Gerald and Lois Owens of Nashoba, OK; uncles Mark Lewis of Broken Arrow, OK and Gary Lewis of Tulsa, OK.

Ashley Anne Owens McClane passed from this life on Thursday, January 9, 2020 at the age of 41 years, 10 months, and 25 days after a hard-fought battle with Lupus. Ashley was born on February 15, 1978 to Jerry Richard Owens and Connie Sue (Lewis)... View Obituary & Service Information

The family of Ashley Anne Owens-McClane created this Life Tributes page to make it easy to share your memories.

Ashley Anne Owens McClane passed from this life on Thursday,...