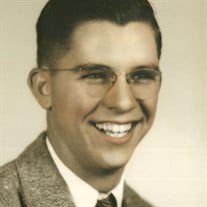 Aubrey Ray Smith, 91, was born on October 17, 1929 in Denison, Texas to Gordon Jasper Smith and Mattie Woodall Smith. Ray had an older sister Wybetta Gilliam (preceded in death) and three sibling that died as infants. He grew up in Denison and graduated from Denison High School in 1947. He played in the marching band and ran track. Ray joined the US Navy in August 1948, was stationed in Atlantic City, New Jersey, Oceania, Viriginia, and Roosevelt Roads, Puerto Rico with squadron VX-3. Ray met Jacqueline (Jackie) while on leave in Atlantic City and would marry her in June 1951. Ray was Honorably Discharged from the Navy in August 1952 and they moved with son Gary Dwain to Denison, Texas where he worked for the Katy Railroad. In 1952 they moved to Dallas where he went to work for Braniff Airways. Second son, Gordon Thomas, was born in Dallas. Summer of 1954, they moved to Tulsa, Oklahoma where he started school at Spartan School of Aeronautics and graduated with his A&P licenses. He then went to work at American Airlines in 1955 and worked there for 32 years. In 1956, a third son, Glen Ray, was born. Ray and Jackie were active members at South Lakewood Baptist Church. Ray was an amazing father, coaching his boys in baseball, teaching them hunting, fishing, golfing, and leading them in boy scouts. He taught his boys how to be a great husband to their wives. Ray loved to travel with Jackie and friends and loved to vacation with his grandkids. He enjoyed his garden, carpenter work, and helping others. Ray and Jackie were married for 70 years. Aubrey Ray Smith went to be with his Lord on September 25, 2021. He is survived by his loving wife, Jackie Smith; sons Gary (Margie) Smith, Gordon (Vanessa) Smith, and Glen (LaDon) Smith; grandchildren Jennifer (Brett) Burton, Jessica (Allen) Jordan, Justin (Michelle) Smith, Jordan (Brianne) Smith, Jaime Tatro, Julie Smith, and Jonathon Smith; and great grandchildren Derrick Smith, Sabrina Smith, Laila Smith, Sydney Tatro, Tyler Tatro, and Soloman Smith. Visitation will be held on Wednesday, September 29 from 10 am - 12 pm at Floral Haven Funeral Home. In lieu of flowers, the family requests that donations be made to: South Lakewood Baptist Church 6108 E. 20th Street Tulsa, Oklahoma 74112

Aubrey Ray Smith, 91, was born on October 17, 1929 in Denison, Texas to Gordon Jasper Smith and Mattie Woodall Smith. Ray had an older sister Wybetta Gilliam (preceded in death) and three sibling that died as infants. He grew up in Denison and... View Obituary & Service Information

The family of Aubrey Ray Smith created this Life Tributes page to make it easy to share your memories.