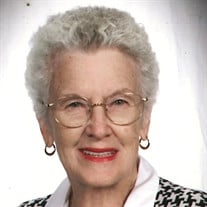 On March 31, 2020, Audrey Jean (McElroy) Laughlin 97, passed away peacefully in her sleep in Hospice Care in Tulsa, Oklahoma, after a long battle with Alzheimer’s. Born March 11,1923 in Wingham, Ontario, Canada to Thomas Albert and Marie Louise (Belisle) McElroy, Audrey grew up in Logansport, Indiana, graduating from Logansport High School in 1941. She would stay friends with the LHS Class of ’41 well past their 70th class reunion. One of the great joys of Audrey’s life was music. She began as a local guest vocalist with Big Bands that would tour the US before and during WWII. Her love of singing continued throughout her life, with her last performance at the age of 96 at a Veteran’s Day program at the Broadmoor Retirement Center, where she resided for 11 years. Two weeks after the end of WWII, Audrey married Colonel Joseph Lyle Laughlin. Their marriage became the greatest adventure of Audrey’s life, spanning over 60 years before Colonel Laughlin’s death in February 2006. Audrey readily accepted the challenge of creating a home at each new assignment over the next 24 years. She set an example for all military wives: moving wherever duty called, raising her four children, embracing and thriving in the social responsibilities. When Colonel Laughlin retired in 1969, he and Audrey chose to live in Miami, Ok, where Audrey enjoyed being a member of the First Presbyterian Church while continuing her involvement in the community and school activities. Their final move was to Claremore, Ok, where Joe and Audrey were able to simply enjoy each other’s company in their twilight years. Audrey once again made sure that it was a welcoming and loving home in which the whole family could gather. She is survived by her 4 children: Bruce (Mary Jo) Laughlin of Tulsa, Craig (Janice) Laughlin of Lewisville, TX, Jo Ann Keirsey of Oklahoma City, and Kelly Rooker Taylor (Bob) of Tulsa, as well as six grandchildren: Jennifer and Jamie Laughlin, Collin Keirsey, and Robert, Elizabeth and John Rooker. Audrey will find peace and be with her love again at Floral Haven Funeral Home. Because of the current health crisis, there will not be a service at this time. Instead, please visit FloralHaven.com to express condolences. Remembrances would be appreciated by the National Museum of the United States Air Force in Dayton, Ohio.

On March 31, 2020, Audrey Jean (McElroy) Laughlin 97, passed away peacefully in her sleep in Hospice Care in Tulsa, Oklahoma, after a long battle with Alzheimer&#8217;s. Born March 11,1923 in Wingham, Ontario, Canada to Thomas Albert and Marie... View Obituary & Service Information

The family of Audrey Jean Laughlin created this Life Tributes page to make it easy to share your memories.

Send flowers to the Laughlin family.