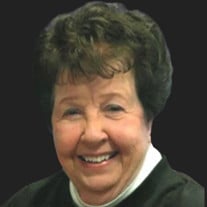 Barbara Jean Chadwell, 92 of Grove, Oklahoma passed from this life on Wednesday, August 12, 2020. She was born December 28, 1927 in Chelsea, Oklahoma to her parents, Tim Sharp and Pearl Evans Sharp. She married the love of her life, L. W. "Chad" Chadwell in February of 1948 and they shared in over 53 wonderful years together before his passing in 2001. Barbara was a graduate of Claremore High School and then went on to pursue a career in banking. She was the first woman, from Oklahoma, to graduate from the Graduate School of Banking, University of Wisconsin as an Audit Major. She was the President of the Oklahoma Chapter of National Association of Bank Women and was a member of the American Institute of Banking. After 45 years in Banking, she retired on January 31, 1991 as Senior Vice President and Auditor of Peoples State Bank in Tulsa, Oklahoma. She was the first woman President of Eastern Oklahoma Chapter of Bank Administration. In 1991, after her retirement, she moved to a home on Monkey Island on Grand Lake. She enjoyed traveling, playing golf, cruising the lake with Chad and in later years known to spend time at the casino where she played the slots and won an RV at the young age of 90. Barbara is survived by nieces and nephews, Justin Sharp, Ernie Childers, Elaine Childers, Vickie Cook, Lisa Armstrong and Anita Morris; a special cousin, Bill Price; long time friends, Jim and Jan Ward; and many other extended family members and friends. She was preceded in death by her parents, Tim and Pearl Sharp; her husband, L.W. "Chad" Chadwell; her sister, Darlene Sharp; and her brother, Jimmy Lee Sharp. Visitation will be held from 3-6 p.m. on Sunday, August 16, 2020 at Floral Haven Funeral Home. Funeral services will be held at 3 p.m. on Monday at Floral Haven Funeral Home Chapel with Pastor Chad Cook officiating. Burial will follow at Floral Haven Memorial Gardens. ***Services will be live streamed starting at 2:45 p.m. on 8/17/2020. To view the service live, please click on the following link: http://webcast.funeralvue.com/events/viewer/34977 In lieu of flowers, memorials may be made to Susan G. Komen Oklahoma Affiliate, 10153 East 79th Street #236, Tulsa, OK 74133 or a charity of one's choice.

Barbara Jean Chadwell, 92 of Grove, Oklahoma passed from this life on Wednesday, August 12, 2020. She was born December 28, 1927 in Chelsea, Oklahoma to her parents, Tim Sharp and Pearl Evans Sharp. She married the love of her life, L. W.... View Obituary & Service Information

The family of Barbara Chadwell created this Life Tributes page to make it easy to share your memories.

Barbara Jean Chadwell, 92 of Grove, Oklahoma passed from this...

Send flowers to the Chadwell family.