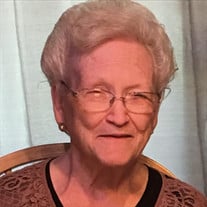 Barbara Jean (Parks) Terrill – Age 83 of Tulsa died August 19, 2020. Barbara was born in Muskogee, Oklahoma to her parents, Robert and Adele Parks. She attended and graduated in the Muskogee school system. After graduation, she worked for Beneficial Finance until she met and married her husband Rex in 1956 with whom she was married to for 64 years and had three daughters. They lived in Ardmore, Oklahoma for six years during which they both joined First Baptist Church. Barbara had a beautiful voice and sang in the choir there and at Tulsa Calvary Baptist Church all their married life until she had to quit for health reasons. She sang in the choir, special small groups, and also sang solo’s. She taught women’s Sunday School for high school girls to women’s classes for years and other jobs including working as a volunteer in the office when needed. She was a good wife and mother, learning how to cook, sew and do crafts such as ceramics, making throw rugs, and along with a few other women, crocheted many hundreds of hats and scarves, mostly for children, but also for adults. They were donated to various agencies and missionaries for distribution to needy children and adults. She started as a volunteer and was later hired and worked many years for Easter Seals of Oklahoma. She traveled all over Eastern and Southeastern parts of Oklahoma, testing children’s eyes in elementary schools. For those who had problems and their parents couldn’t afford glasses, Easter Seals provided them at no cost. Barbara was greatly loved by her family and many friends and will be greatly missed by all. She was preceded in death by her parents, a brother, Lindsey, and a sister, Vesta, who died when Barbara was 2 years of age. She is survived by her husband of 64 years, Rex, three daughters, Vickie Rhodes of Sherwood, Ohio, Robin Fowler (Jerry) of Owasso and Rexanne McCrary (Scott) of Bixby. Brother, Lawrence Parks (Pam) of Tahlequah. Seven grandchildren, Sarah, Bryce, and Erin (Erik); Stephanie (Matthew) and Jared; Kailee and Camden and 3 great grandchildren, Allison, Alexis and Adley. Viewing will be held Thursday, August 20, 2020 from 5:00 pm to 7:00 pm at Floral Haven Funeral Home and Funeral Services will be held at 2:00 pm Friday, August 21, 2020 at Floral Haven Rose Chapel in Broken Arrow. ***FOR THOSE THAT CANNOT ATTEND THE SERVICE IN PERSON, PLEASE COPY AND PASTE THE FOLLOWING WEB ADDRESS IN YOUR BROWSER OR CLICK ON THE LINK: THE LIVE STREAM WILL START AT APPROXIMATELY 1:45 PM. IF YOU DO NOT SEE THE LIVE FEED, PLEASE REFRESH THE PAGE UNTIL IT APPEARS*** http://webcast.funeralvue.com/events/viewer/35492

Barbara Jean (Parks) Terrill &#8211; Age 83 of Tulsa died August 19, 2020. Barbara was born in Muskogee, Oklahoma to her parents, Robert and Adele Parks. She attended and graduated in the Muskogee school system. After graduation, she worked... View Obituary & Service Information

The family of Barbara Jean Terrill created this Life Tributes page to make it easy to share your memories.

Send flowers to the Terrill family.