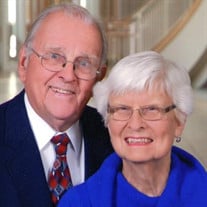 Barbara Ann Westervelt of Tulsa, Oklahoma went to be with the Lord on March 20, 2021 following a brief illness. In celebration of her life, a memorial service will be held for close family and friends on Thursday, March 25, 2021 at 12:30pm at the Floral Haven Cemetery chapel. A viewing will begin at 11:30am in the chapel. Barbara was born on January 9, 1929 in Oklahoma City, OK to Lloyd Barton and Anna H. (Anderson) Davenport. She remained close friends with her sister, Dorothy Dean, throughout her lifetime. Barbara met Wallace Wood Westervelt, the love of her life, through the youth group at Wesley United Methodist Church in Oklahoma City. After graduating from Classen High School, she attended Oklahoma State University for a short time. Soon after, Barbara and Wallace began their courtship, marrying in 1949. Over their 70+ years of marriage, they had many adventures together including traveling and living overseas. Barbara loved telling stories of their time spent in Iran in the late 1970’s. Together, they had three children: Wallace Wood Westervelt Jr., Linda Ann Kniatt, and Donald Neal Westervelt. Barbara loved to cook and bake, always excited to try the latest recipe she would find in the newspaper or Southern Living magazine. She enjoyed sharing her favorite recipes with her family, grandkids and friends. She and Wallace always had a flourishing vegetable garden that kept them busy; and the big apple tree in their backyard was always full of apples and fond memories for the grandkids. Both Barbara and Wallace were active in the local Master Gardeners club, sharing their love of gardening with others. Barbara was also a member of the Philanthropic Educational Organization (P.E.O.) for many years and was an active member at Asbury United Methodist Church. Barbara is survived by her husband, Wallace Westervelt Sr.; her son Wally Westervelt and wife Norma; her daughter Linda Kniatt and husband Steve; her son, Don Westervelt and wife Sherri; nine grandchildren, Stephen Kniatt, Stacey Wolf and husband Spencer, Cheryl Littlefield and husband Jay, Curtis Kniatt and wife Katie, Anna Westervelt, and Kristin Westervelt; and six great-grandchildren, Greyson, Connor and Baker Kniatt, Owen and Elizabeth Wolf, and baby Littlefield due in September. She is also survived by her sister, Dorothy Dean Dutton. Additionally, she leaves behind many nieces and nephews and countless friends. She was preceded in death by her grandson Alex Westervelt, and her father and mother. Should friends desire and in lieu of flowers, memorial contributions can be made to two organizations that Barbara held dear: Tulsa Master Gardeners (tulsamastergardeners.org), and Tulsa Botanic Garden (my.tulsabotanic.org). Funeral Services will be held on Thursday, March 25, 2021 at 12:30 pm at the Floral Haven Chapel, with visitation taking place an hour beforehand. View Funeral Webcast

Barbara Ann Westervelt of Tulsa, Oklahoma went to be with the Lord on March 20, 2021 following a brief illness. In celebration of her life, a memorial service will be held for close family and friends on Thursday, March 25, 2021 at 12:30pm at... View Obituary & Service Information

The family of Barbara Westervelt created this Life Tributes page to make it easy to share your memories.

Barbara Ann Westervelt of Tulsa, Oklahoma went to be with the...

Send flowers to the Westervelt family.