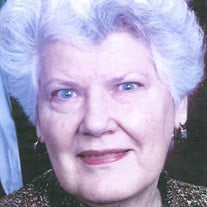 Barbara Witter, 84, was born on May 2, 1935 and passed on February 17, 2020 after a long and blessed life. She married James E. Witter on August 14, 1955 and spent 64 very happy years with him, their daughter, Terri Witter, their son Tony and wife Connie Witter, and one adopted, Patty Witter Son, deceased. Jim and Barb are grandparents to Justin (Jessica) Witter, Jared (Lauren) Witter, Kristen (Hugh) Westhoff, and Victoria Witter along with 5 great-grandchildren with one more little one on the way in July. Barb was born to Newton and Grace (Farlow) Brown in Mt. Vernon, Illinois on May 2, 1935, and was a sister to David Brown (all precede her in death). She is also survived by four nephews. An outstanding musician who played flute and piano while holding first-chair positions on state levels and many other honors all through high school and college, she was her high school's drum major while Jim, her high school sweetheart, played the trombone. He claims to have chased her all through high school while marching in the first row of the marching band. They had promised Barb's parents that they would wait until Jim was discharged from the service and Barb had graduated from college. They kept that promise. Jim had been home from German for 10 days when he picked up Barb from graduation to attend their rehearsal dinner. At the wedding, Barb's best friend and maid of honor's name was also Barbara Ann Brown, making it appear as though Barb witnessed her own marriage. Barb attended Oberlin College in Oberlin, Ohio; Southern Illinois University; University of Illinois; and Illinois State University. She was an elementary teacher and taught many grades and subjects for Unit District 140 in Eureka, Illinois. After retiring from teaching, she worked at St. Francis Hospital in Peoria , Illinois as a medical transcriptionist and in the billing department. Barbara also taught music lessons in the home and played piano for several churches. One of her most amazing talents was her ability to knit beautiful sweaters and afghans, many of which were very intricate and involved Irish patterns. Most years she would start a large afghan at the beginning of a school year and finish it in time for graduation in the spring. She left many warm treasures behind for family and friends. She also loved travelling , reading, playing bridge, bowling, and a number of other things. Visitation will be held from 2pm - 5 pm on Sunday, February 23 at Floral Haven Funeral Home. Services will be at 10 am on Monday, February 24 at Floral Haven Chapel. In lieu of flowers, memorials may be made in Barb's name to: American Porphyria Foundation 4915 St. Elmo Ave Suite 200 Bethesda, MD 20814 or Forrest Park Christian Church 9102 S. Mingo Road Tulsa, OK 74133

The family of Barbara Witter created this Life Tributes page to make it easy to share your memories.

Send flowers to the Witter family.