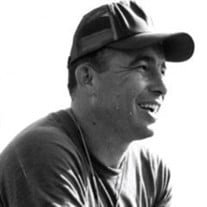 Bennie Bob Kiger, age 87, born in Panama and most recently of Broken Arrow, OK, passed away peacefully on April 7, 2020. Born on August 21st, 1932, and the oldest of five, Bennie was a natural athlete, graduating from Panama High School in 1950. Recruited to play for Oklahoma State University, Bennie soon transferred to Northeastern State University. At NSU, Bennie was the first of four Kiger brothers on Redman champion football teams, was an All-Conference Halfback in 1952 and 1953, and in 1953 became the first All-American football player named from that university. In 1987, he was inducted into NSU’s Athletics Hall of Fame. After graduation in 1954, Bennie married his college sweetheart, Marynelle, and built a home in Vian. Bennie and Marynelle’s life reflected a love story that never faltered. Bennie was a stellar and passionate high school football coach, winning numerous conference championships for Vian, Tahlequah, Catoosa, and Collinsville. His home with Marynelle was a warm one, and they always welcomed the chance to host players, fellow coaches, friends, and family. He was ultimately named one of the top all-time “coaches of the century” in the Muskogee area by the Muskogee Phoenix and was also awarded Oklahoma All-State Coach of the Year in 1970. Upon retirement from coaching, Bennie worked as an insurance agent for Fidelity Union Life Insurance Company before retiring. For those who knew Bennie, it always seemed he could accomplish anything he set his mind to, especially when it came to art. Bennie’s passion for horse racing led him to become an artist later in life, as he loved the chance to capture the speed and beauty of horses in motion. Bennie was also known for his beautiful bird carvings; these were celebrated by Gov. George Nigh at the Oklahoma capital. Most recently, he was commissioned to paint 14 Flags, a fiberglass horse art project that now resides on Main Street in Sallisaw. In addition, he was a devoted member of the United Methodist Church, beginning with Vian UMC, where he served as a lay pastor, and ending with First United Methodist Church in Sallisaw, where his murals depicting bible stories still line the education wing. Bennie was happiest surrounded by family. He wrapped his grandchildren and great grandchildren in constant love and doted on them at every chance. He was adored by all. Bennie is survived by his beloved wife of 63 years, Marynelle (Watkins) Kiger; his siblings, Sue Irvin, Joe Kiger and wife Beverly, and sister-in-law Phyllis Kiger; his children, Teresa Aulph and Robyn Pirovitz and husband Philip; his four grandchildren, Joshua Walker and wife Karen, Brady Walker, Amanda Pirovitz, and Sarah Humphreville and husband Alex; and six great grandchildren. He is predeceased by his parents, Clarence William "P.I." and Madge Brashears Kiger, and his brothers, Ronnie and Davey Kiger. Like George Bailey of Frank Capra’s It’s a Wonderful Life, Bennie Kiger lived his life giving of himself to the towns and people of Southeastern Oklahoma. He loved nothing better than to be surrounded by the people of this community. If desired, in lieu of flowers, the family asks that you please consider a donation to Hospice of Green Country, www.hospiceofgreencountry.com, in appreciation of the care and kindness expressed during this tragic time. The family has requested that if you have a face mask please wear it. Celebration of Life Memorial Service will be 3:00 pm, June 26, 2020 at Floral Haven Funeral Home Chapel. ***FOR THOSE THAT CANNOT ATTEND THE SERVICE IN PERSON, PLEASE COPY AND PASTE THE FOLLOWING WEB ADDRESS IN YOUR BROWSER OR CLICK ON THE LINK: THE LIVE STREAM WILL START AT APPROXIMATELY 2:45 PM. IF YOU DO NOT SEE THE LIVE FEED, PLEASE REFRESH THE PAGE UNTIL IT APPEARS*** http://webcast.funeralvue.com/events/viewer/30956

Bennie Bob Kiger, age 87, born in Panama and most recently of Broken Arrow, OK, passed away peacefully on April 7, 2020. Born on August 21st, 1932, and the oldest of five, Bennie was a natural athlete, graduating from Panama High School in... View Obituary & Service Information

The family of Bennie Bob Kiger created this Life Tributes page to make it easy to share your memories.

Bennie Bob Kiger, age 87, born in Panama and most recently of...

Send flowers to the Kiger family.