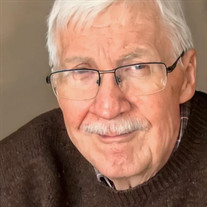 Longtime Tulsa resident Bertram “Bert” Sterling Shelby passed away in Overland Park, Kansas, on January 16 in the loving presence of his children and family. Bert was born on March 5th, 1932 in Oklahoma City to DeWitt Shelby and Addie Mae Evans Shelby. He graduated from Capitol Hill High School in 1951, where he was active in choir and student government. Bert attended the University of Oklahoma, serving in ROTC and graduating in 1955 with a BS in Geology and an officer’s commission in the U.S. Army. He married his high school sweetheart Marilyn Sue “Wren” Hammett on Dec. 26th, 1954. After graduation, Bert served as an artillery officer, leaving active duty in 1960 as a 1st Lieutenant and continuing to serve as a reserve officer until 1968. Bert had a successful career as a geologist, working over 35 years in the oil and gas industry. Starting as a well logger at Arkansas Fuel & Oil Corporation, and then a drilling project manager at Cities Service Oil & Gas Corporation, he worked on drilling projects from the swamps of Louisiana to oil fields in Texas, Oklahoma, the Rockies, Canada, the Gulf of Mexico, and the Java Sea. Bert co-founded the Tulsa Well Logging Society in 1970. He served as an industry advisor to the American Petroleum Institute and U.S. Department of Energy on advanced enhanced oil recovery technologies and the early use and development of seismic imaging in oil and gas exploration. Bert was a manager of professional development and director of special projects at Occidental Petroleum Corporation, including the training of Hungarian, Romanian, and Chinese geologists and engineers in Tulsa in the early1980s. Bert spent a lifetime in community service as a volunteer to many organizations, including the American Lung Association, the Red Cross disaster team, and local hospitals. He was active in the Jaycees and served as president of the Oklahoma Jaycees in 1968. Bert was a scout leader of Boy Scout Troop 26 for over three decades and was awarded one of the highest honors in Scouting, the Silver Beaver Award, for his many years of service. Bert survived his beloved wife Marilyn of 57 years and his sisters Nancy Sanders of Dallas, Texas, and Martha Sue Hart of Oklahoma City, Oklahoma. He is survived by daughter Lissa Clark and her husband Dwight Clark of Overland Park, Kansas; son Dr. Kent Shelby and his wife Carolyn Shelby of Columbia, Missouri; son Mark Shelby and his wife Noemi Galang Shelby of Denver, Colorado; and daughter Debra Ross and her husband Dr. Randall Ross of Ada, Oklahoma. Bertram is also survived by his ten grandchildren Bryan Clark, Dr. Kimberlee Reetz, Ridley Shelby, Auden Shelby, Isabella Shelby, Coulter Shelby, Hawker Shelby, Rylan Ross, Hunter Ross, and Elaura Ross, and his six great-grandchildren Cooper Clark, Mckinley Clark, Cael Clark, Parker Reetz, Wren Reetz, and August “Gus” Reetz. Bert was a loving, gentle, encouraging, and involved father, grandfather, and great-grandfather. He loved to share his knowledge of geology, and to sing and tell jokes and tall tales to his children, grandchildren, and great grandchildren. Memorial services will be held at the Floral Haven Family Center on August 7, 2021, at 2:00 p.m.

Longtime Tulsa resident Bertram &#8220;Bert&#8221; Sterling Shelby passed away in Overland Park, Kansas, on January 16 in the loving presence of his children and family. Bert was born on March 5th, 1932 in Oklahoma City to DeWitt Shelby and... View Obituary & Service Information

The family of Bertram Shelby created this Life Tributes page to make it easy to share your memories.

Send flowers to the Shelby family.