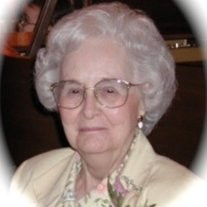 BETH W. WOODRUFF OBITUARYMary Elizabeth (Wilson) Woodruff was born on her family’s farm near the town of Milburn, Carlisle County Kentucky on May 5, 1919. She was the eldest of the five children of Humphrey Davis Wilson and Mary Olivia (Frizzell) Wilson. She was known to family and friends as Beth. She grew up in and around Milburn, where she attended Milburn public school and completed her high school credits early by taking double classes. At seventeen years of age, Beth entered Murray State Teachers College (now Murray State University) through the National Youth Administration (NYA) work-study program, then completing a BS degree in Home Economics. She was an excellent cook and, owing in part to her college training, she was very creative in feeding her family on a budget when her boys were young. Beth met her future husband John N. Woodruff at Murray State before he enlisted in the Army Air Corps during WWII. They were married March 28, 1942, in Urbana, IL, where John was stationed. They soon moved to Davis-Monthan Airfield near Tucson, AZ, where John was reassigned. Their first son John Robert was born there in October 1943. Anticipating her husband John’s overseas deployment, Beth returned with baby John in 1944 to Milburn, KY where she taught school. When the war ended in 1945, the family moved to John’s hometown of St. Charles, KY, where their second child Gary Dale was born in March 1946. In 1950 they returned to Murray to complete John’s Bachelor of Science degree before moving to Lexington, KY, where John completed a Masters degree in June 1953. During that time, Beth made clothes for their two boys and sewed for others for extra income, making curtains and dresses and even a woman’s suit and wedding dress. Following John’s graduation, the family returned to Murray briefly before moving to Joplin, MO, where John worked for a wholesale agricultural supply company. Beth continued being a stay-at-home mother and housewife and gave birth to the couple’s third child, William David, August 1955. In September 1955 the family moved to Tulsa where Beth began taking courses to meet Oklahoma Teacher’s Certification requirements. She was hired by Tulsa Public Schools as a substitute teacher before obtaining her Oklahoma teaching certificate and later as a full-time elementary school teacher. She spent most of her teaching career at Carnegie Elementary School near 61st Street and Yale Avenue. She taught first and second grades and later fourth grade as well. Beth actively helped Oral Roberts ministries and the Victory Christian Center during this time. In 1979 she underwent a radical mastectomy, and cancer did not reoccur for the remainder of her life. She did, however, suffer heart problems which reduced her energy and activity levels in later years. Following her husband’s death in 2009, Beth moved to Oklahoma Methodist Manor in Tulsa, where she resided successively in independent living, assisted living and prior to her death the long-term care facility. She was weakened by the cumulative effects of falls and fractures and the effects of congestive heart and progressive kidney failure. She passed away in the early morning of January 5, 2014 at the age of 94. Beth will best be remembered for her friendly but firm and consistent nature; her nurturing as a teacher and mother; her devotion to family and faith; her spotless housekeeping and cooking ability and her self-professed tendency to always be something of a “scamp.” She was preceded in death by her husband John Nichols Woodruff, her eldest son John Robert Woodruff, parents Humphrey Davis and Mary Olivia Wilson, sister Marjorie Wilson Moore, infant sister Naomi Ruth, brother Roy Henry Wilson, granddaughter Kimberly Anne Woodruff and great-granddaughter Rebecca Woodruff. She is survived by her brother Jack Wilson of Aurora, CO; son Gary and wife Julie of rural Claremore, OK; son William David and wife Rose Anna of Tulsa, OK; daughter-in-law Carolyn Woodruff of rural Claremore, OK; grandchildren John, Erin, Laurie, Elisa, Michael and Natalie as well as 11 great-grandchildren. Visitation will be 2:00-8:00 PM Wednesday, January 8th, 2014 Floral Haven Funeral Home. Funeral Services will be held 12:30 PM Thursday, January 9, 2014 Floral Haven Funeral Home Chapel. Contributions may be made in Beth’s honor to Victory Christian General Fund or the American Cancer Society.

BETH W. WOODRUFF OBITUARYMary Elizabeth (Wilson) Woodruff was born on her family&#8217;s farm near the town of Milburn, Carlisle County Kentucky on May 5, 1919. She was the eldest of the five children of Humphrey Davis Wilson and Mary Olivia... View Obituary & Service Information

The family of Beth Woodruff created this Life Tributes page to make it easy to share your memories.