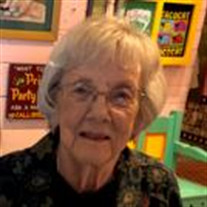 Betty Ann Lincecum, 88 of Tulsa, Oklahoma passed from this life peacefully on Tuesday, February 18, 2020 in Tulsa, Oklahoma with her family by her side. She was born March 23, 1931 in Altus, Oklahoma to her parents, Thomas Edward Christopher and Nadine Josephine Meridith Christopher. She married her high school sweetheart, Bob Lincecum on June 7, 1952 in Dallas, Texas and they shared in 63 beautiful years together before his passing in 2015. Betty is survived by three children, Steven Lincecum of Weatherford, Texas, Chris Lincecum and his wife Robin of Bixby, Oklahoma and Sallie Hill and her husband Dan of Edmond, Oklahoma; six grandchildren, Tucker Lincecum, Leslie Slaughter and her husband Kendall, Corey Hill, Nolan Hill, Timothy Michaels-Johnson and his wife Katie and Matthew Michaels-Johnson; and three great-grandchildren, Oliver "Ollie" Slaughter, Rex Michaels-Johnson and Jamie Michaels-Johnson. She was preceded in death by her parents, Thomas and Nadine Christopher; her husband, Bob Lincecum and her sister, Mary Jo Lowrey. Betty spent her early years moving from oil town to oil town as her father worked as a pipeliner for Magnolia/Mobil Oil. She told stories of her time in the Midland-Odessa Texas area of sitting on the fence with her sister throwing rocks at rattle snakes as the tumbleweeds rolled by. Her father was promoted to the Mobil management team in Dallas, Texas when she began her Freshman year at Sunset High School in the Oak Cliff area. There she met "Bobby" and many others who would become lifelong friends of both her and her husband. They began their married life living in Fort Bragg, North Carolina, followed by Dallas and Fort Worth, Texas, until her husband's job brought them to Broken Arrow, Oklahoma in 1972. She spent most of her married life as a homemaker. After her children were out of the house, she worked for the Broken Arrow Public School System for many years at Sequoyah Middle School as a Teacher's Aide and then the Librarian's Aide. She was active for many years in the Financial Investment Group and also the Book Club, both at Indian Springs Country Club. Betty was a gracious and generous woman who was always ready to help others. Hospitality was a part of who she was. The door was always open, the coffee pot was always on and everyone was always welcome at any time. She had a witty side that could put a smile on your face and absolutely make your day. She will be remembered for her calm and gentle spirit and the joy she brought to our lives. A celebration of life memorial will be held at 2:00 p.m. on Saturday, February 22, 2020 at Floral Haven Funeral Home's Main Chapel. In lieu of flowers, please make a memorial to Clarehouse by visiting: https://www.clarehouse.org/donate/

Betty Ann Lincecum, 88 of Tulsa, Oklahoma passed from this life peacefully on Tuesday, February 18, 2020 in Tulsa, Oklahoma with her family by her side. She was born March 23, 1931 in Altus, Oklahoma to her parents, Thomas Edward Christopher... View Obituary & Service Information

The family of Betty Lincecum created this Life Tributes page to make it easy to share your memories.

Betty Ann Lincecum, 88 of Tulsa, Oklahoma passed from this life...

Send flowers to the Lincecum family.