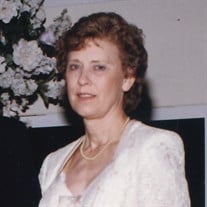 Betty Jane Nelson of Owasso, Oklahoma, died on July 20, 2020 at the age of 77. She was born on August 16, 1942 in Purcell, Oklahoma to Loy Jackson and Cora Eldora (Sullivan) Keys. She graduated from Maysville High School, alongside her twin sister Martha, in Maysville, Oklahoma in 1960. Betty married Paul Avery Nelson in October of 1966 and after living for a time in Texas, settled in Owasso, Oklahoma. Betty was a highly coveted substitute teacher with Owasso Public Schools and was considered a favorite by many students. She then retired after working in the mailroom for Channel 2 News in Tulsa, Oklahoma. Betty was a fierce competitor and throughout her life enjoyed playing sports including softball, basketball, and volleyball. She went on to coach her daughter Julie in basketball and played softball alongside her in an adult league. Aside from spending time with her family and friends, she absolutely adored playing Bridge. Betty was a highly sought-after Bridge partner and worked diligently to achieve her Life Master which she accomplished in 2009. Betty was preceded in death by her mother and father, her brother Kenneth Keys, her eldest sister Lily Green, and her older sister June Day. Betty is survived by her beloved husband of 53 years, Paul Avery Nelson, her daughter, Julie Jane Nelson Neece of Spring, Texas, and her son Michael Paul Nelson and wife Angie of Ramona, Oklahoma. She is survived by her older brother Jerry Keys and wife Kathy of Oologah, Oklahoma, her sister Lolita Green of Tulsa, Oklahoma, her twin sister Martha Ogle of Eufaula, Oklahoma, and her younger brother Don Kees of Eufaula, Alabama. She also leaves behind her cherished grandchildren, Blaine Neece, Stormie Nicole Neece, Seth Nelson, and Skylar Nelson. Great-grandchildren include Keegan Neece, Nova Jane Leach, Cole Leach, and Lola Leach. Betty was blessed to have countless other family members and friends throughout her lifetime. Visitation will be held on Saturday, July 25 at 8:30 am at the Floral Haven Chapel. For those unable to attend, follow the link below for webcasting services: View Funeral Webcast

Betty Jane Nelson of Owasso, Oklahoma, died on July 20, 2020 at the age of 77. She was born on August 16, 1942 in Purcell, Oklahoma to Loy Jackson and Cora Eldora (Sullivan) Keys. She graduated from Maysville High School, alongside her twin... View Obituary & Service Information

The family of Betty Nelson created this Life Tributes page to make it easy to share your memories.

Send flowers to the Nelson family.