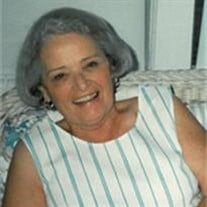 Betty Jean (Hefley) Tygart went Home to be with her Lord and Savior on September 3, 2011. She was 84 years old. Betty was the daughter of James A. Hefley and Frances (Poteete) Hefley. She was born February 15, 1927 and raised in Webbers Falls, OK. She graduated from Webbers Falls High School in May 1945. She moved to Tulsa and began working for the Tulsa World and Tribune after graduation. She met Jim Tygart on a blind date and on August 16, 1947 Betty married James Lowell Tygart in Tulsa. They were blessed with two sons, Delbert and Darrell. They made their home in Tulsa until 1958 when they moved to Broken Arrow, OK. Betty was gifted as a seamstress and also in the art of crochet, filling her home with beautiful handwork. She worked for Wardrobe Cleaners and NuWay Cleaners for many years. Later she had an alterations business in her home. In her spare time, Betty loved going to garage sales and finding a good bargain. After retirement, she and Jim enjoyed traveling in their RV to places like the Dakotas, Yellowstone, and visiting family from the East Coast to West. Being the oldest of 13 children, much of Betty’s ealry years were spent tending to the children while her parents worked in the field. Beacuse of this, from a very young age she was a very good cook and homemaker. Betty loved her church. She was a member at Northside Christian Church for over 50 years. Recently, she was so proud of the new building and wasÂ always inviting someone to come to “her” church. Betty is survived by her husband, Jim, of the home; son, Delbert and wife, Rhonda of Verdigris, OK; son, Darrell and wife, Tami of Falcon, CO; eight grandchildren and 10 great grandchildren with another on the way. Betty is also survived by six brothers and four sisters. She was preceded in death by her parents; two brothers, Joe Paul Hefley and Frank Hefley and one great grandson, James Coy Tygart. Â In ieu of flowers the family has requested donations in her name to the American Heart Association, St. Francis Hospice, Northside Christian Church or the Charity of your choice.

Betty Jean (Hefley) Tygart went Home to be with her Lord and Savior on September 3, 2011. She was 84 years old. Betty was the daughter of James A. Hefley and Frances (Poteete) Hefley. She was born February 15, 1927 and raised in Webbers Falls,... View Obituary & Service Information

The family of Betty Jean Tygart created this Life Tributes page to make it easy to share your memories.

Betty Jean (Hefley) Tygart went Home to be with her Lord and...