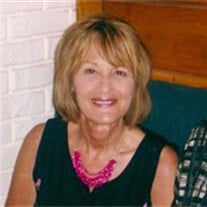 Raylene was born Betty Raylene Mullins, the second child to Ray and Juanita Mullins inFullerton, CA on December 19, 1947. She met Jim, her future husband on a blind date while he was in the Air Force, stationed in Wichita Falls, Texas. After a year and a half and numerous letters back and forth, they married on June 22, 1968 in Whittier, California, returning to Texas to finish out his service duty. In the meantime, they had 2 children, Rhonda Jean Woodring (Gordon) born July 24, 1970 and Randy Lee Woodring, born March 18, 1972. When her children were in school, she went back to college to finish her degree and became a certified medical assistant. She worked for many years in doctorâ??s offices and clinics where she enjoyed interacting with people and making a difference in their lives. They decided to leave southern California and moved back to Oklahoma in 1983, where it quickly became home because it waswhere God wanted them to be. Her main interest was her family, where watching her children grow up brought her insurmountable joy. She also saw Jimâ??s dream for owning his own business become a reality and becoming a grandmother. Being a grandma to Logan and Jay was her biggest joy in life. She loved watching her grandsons grow up and being involved with them was such an integral part of her life. Raylene is preceded in death by: Her nephew â?? Rocky Lee Mullins, Jr. Her brother â?? Rocky Lee Mullins. Her mother â?? Juanita Bell Mullins. Her father â?? Rayford William Mullins.Raylene is also preceded in death by other various family members. Raylene was survived by: Her husband of 44 years, Jim Woodring, Her daughter and son-in-law, Reverend Scott and Rhonda Gordon of Liberty, MO. Her son, Randy Woodring of Dallas, TX, Her 2 grandsons, Logan and Jay Gordon of Liberty, MO, Her niece and husband, Debbie and Keith Eads of Apple Valley, CA, Her father and mother-in-law, Howard and Martha Woodring of Canyon Lake, CA, Her sister-in-law and husband, Kathleen and Ronald Beaufort of Laguna Nigel, CA, Her sister-in-law and husband Nancy and David Lewis of Riverside, CA, Her sisterin-law and husband Brenda and David Crockett of Fillmore, CA. Raylene is also survived by several cousins, numerous nieces and nephews and very special friends that were such an important part of her life. In the last years of her life, she served as a hospice volunteer for Saint Francis Hospice. She said so many times what a blessing hospice and her patients were to her. She found the essence of Godâ??s love by sitting with people as they were about to leave this world and enter the next. Spending time with her friends and her Sunday school â??familiesâ? were highlights, and her deep faith in the Lord kept her grounded when the tough times and chronic pain came into her life. Through her daily pain, she endured with vigor and never lost sight of how important it was to be of service to those around her and continually praised God for the blessings she had in her life. Throughout her life, when a chapter, event or cycle ended, Raylene repeatedly said and can equally be said about her life, â??never be sad that it is over, but rejoice that it had happened.â? In lieu of flowers, the family requests donations to be sent to Baptist Childrenâ??s Home of Owasso. 12700 E. 76thÂ St. N. Owasso, Ok, 74055 or email [email protected] Services will be held August 2nd, 2012 at 10:00 am at Arrow Heights Baptist Church 3201 South Elm Place, Broken Arrow, OK 74012. Â Â The life of Betty Raylene Woodring

Raylene was born Betty Raylene Mullins, the second child to Ray and Juanita Mullins inFullerton, CA on December 19, 1947. She met Jim, her future husband on a blind date while he was in the Air Force, stationed in Wichita Falls, Texas. After... View Obituary & Service Information

The family of Betty R. Woodring created this Life Tributes page to make it easy to share your memories.