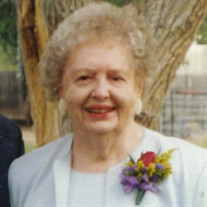 Beverly Jane Birtell, 93 of Broken Arrow, Oklahoma passed from this life on Sunday, January 1, 2022 at her home in Broken Arrow. She was born on May 18, 1928 in Los Angeles, California to her parents, Vantage "Van" Vedette Browning and Edna Fern Dalton Browning. She moved back and forth with her family between Los Angeles, California and Broken Arrow, Oklahoma almost every year during her early school years. She graduated from Broken Arrow High School in 1946 and went to Oklahoma A & M and met Jim Birtell at the First Presbyterian Church in Stillwater, Oklahoma. They graduated in May 1950 and she worked in Tulsa, Oklahoma until they were married on Easter Sunday, March 25, 1951. They lived in Russell, Kansas for 6 months before moving to Borger, Texas. In 1952 Beverly taught business classes at Borger High School. Following a short time in Bartlesville, Oklahoma, they came back to Borger where Beverly again taught typing, short hand and other business classes at Borger High School and Frank Phillips College from 1954-1978. During this time, she was blessed to have her son’s girlfriend, Susie, and her daughter Sandy’s friends, Cheryl and Carol help her grade papers. Following Jim’s retirement in 1985, they enjoyed spending every winter in the Rio Grande Valley for 29 years. They moved from Borger to Broken Arrow, Oklahoma, in 1988. Beverly is survived by her loving husband of 70 years, Jim Birtell of the home; two children, Don Birtell and his wife Susie of Borger, Texas and Sandy Nation and her husband Roger of Broken Arrow, Oklahoma; one sister, Pat Stocker of Bartlesville, Oklahoma; five grandchildren, Dawna Irving and her husband Josh, Dayna Huffington and her husband Mark, Aaron Birtell and his wife Perla, Dustin Nation and his wife Carolyn and Miranda Conn and her husband Michael; fourteen great-grandchildren and many friends and extended family members. She was preceded in death by her parents. Visitation will be held from 3-6 p.m. on Wednesday, January 5, 2022 at Floral Haven Funeral Home. A memorial service will be held at 12:30 p.m. on Thursday, January 6, 2022 at Floral Haven's Funeral Home Chapel. Burial will be private. ***Services will be live streamed starting at 12:25 PM on Thursday, January 6, 2022. To view the service live, please click on the following link: http://webcast.funeralvue.com/events/viewer/66315 In lieu of flowers memorials may be made to Broken Arrow Neighbors, 315 W College St, Broken Arrow, OK 74012 or to a charity of one's choice.

Beverly Jane Birtell, 93 of Broken Arrow, Oklahoma passed from this life on Sunday, January 1, 2022 at her home in Broken Arrow. She was born on May 18, 1928 in Los Angeles, California to her parents, Vantage "Van" Vedette Browning and Edna... View Obituary & Service Information

The family of Beverly Jane Birtell created this Life Tributes page to make it easy to share your memories.

Send flowers to the Birtell family.