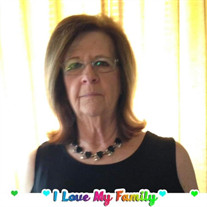 Beverly Sue Rowan passed away January 3, 2022, in Tulsa, Ok. Beverly was born on Jan 7th, 1952, in Cushing, Ok to Harold Lee Wakefield and Bonnie Sue Crider Wakefield. In 1954 they moved to California but then moved back to Oklahoma in June 1967. This is when she met Carl Junior Rowan at Sequoyah Bay State Park. They married in April 1970 of her Senior year at Broken Arrow High School. Carl was then deployed to Vietnam War to which they had to move to New Jersey for his basic training. Beverly ended up pregnant with their 1st son Donny. So, she moved back to Oklahoma to be with family while Carl was gone. Donny was born in 1971 then had their second son Berry in 1973 and then their daughter Tammy was born in 1979. Throughout her life she had various jobs such as a 911 dispatcher, working at an eye doc clinic, claims processor, receptionist/ secretarial until she retired in 2013 to become a full-time memaw/ grandma. Throughout the years Beverly enjoyed raising her 3 kids and watching them playing football, wrestling, to 1 year of cheerleading. Berry and Tammy got into 4-H and FFA where she was very active for several years in the FFA Alumni. Later on she became very involved in all 3 of her kids racing hobby. After 14 years of racing with lots of grandkids running around, she decided to help take care of her10 grandkids and 3 great-grandkids. She always enjoyed sewing, crocheting, painting, gardening, and clay pottery In February 2020, Beverly lost her husband Carl to cancer. They were 2 months shy of their 50th Wedding Anniversary. On Jan 2nd, 2022, she said she was ready to go home and be with her husband. So on January 3rd she requested Amazing Grace and was singing it as she took her last breath. She will be deeply missed by her kids, grandkids, great-grandkids plus many more. Beverly is survived by her children, Donny Rowan and his wife Stephanie, Berry Rowan and his wife Karen, and Tammy Foster and her husband Jeff; grandchildren, Zachary Rowan and his wife Cheyenne, Bryan Rowan, Hunter Rowan, Tory Rowan, Jacob Rowan, Savanna Rowan, Jalynn Foster, Tanner Foster, Tatum Foster, and Jentry Foster; great-grandchildren, Harper Rowan, Xoey Rowan, and Carson Heavener; sister, Brenda Rowan; Brother, Raymond Wakefield; numerous nieces and nephews. Beverly was preceded in death by her husband Carl Jr Rowan. Visitation will be 3:00 PM to 6:00 PM, Friday, January 7, 2022, at Floral Haven Funeral Home. The funeral service will be 10:00 AM, Saturday, January 8, 2022, at Floral Haven Funeral Home Chapel.

Beverly Sue Rowan passed away January 3, 2022, in Tulsa, Ok. Beverly was born on Jan 7th, 1952, in Cushing, Ok to Harold Lee Wakefield and Bonnie Sue Crider Wakefield. In 1954 they moved to California but then moved back to Oklahoma in June... View Obituary & Service Information

The family of Beverly Sue Rowan created this Life Tributes page to make it easy to share your memories.

Send flowers to the Rowan family.