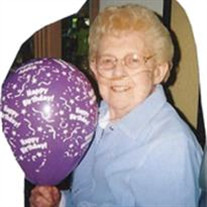 Beverly L. (Becky) Seidel was born on July 5, 1920 in Kendallville, IN., the daughter of Louis S. W. Seidel and Wava Belle (nee Brandeberry) Seidel.Â Since July 4, 1920 fell on a Sunday, and since people back then werenâ??t allowed to â??celebrateâ? on Sunday, she came into this world amidst firecrackers booming on the following day.Â Hence, she was considered a â??Yankee Doodle Dandy.â?Â Becky was baptized at home at the age of five days by Dr. M. F. Kretzmann, St. John Lutheran Church.Â She attended St. John Christian School from first through eighth grade and was confirmed by Dr. Kretzmann in 1934.Â Subsequently, she graduated from Kendallville High School in 1938.Â Â She always wanted to be a teacher, so in spite of difficult economic times, she was able to get through her freshman year on a borrowed $100.00, and she worked as a lab assistant the following three years for $.35 per hour.Â She received a baccalaureate degree from Ball State University, a masterâ??s from the University of Michigan, and a doctorate from Case-Western Reserve.Â She also did post-doctoral study at the University of Illinois.Â However, she didnâ??t study all the time.Â She also did some â??wildâ? things such as sky-diving, houseboating in uncharted waters, flying to the Bahamas in a single-engine plane, and the like.Â Becky taught a total of 37 years:Â 2 years in Indiana high schools, 2 years at the University of Michigan, and 33 years at Kent State University.Â She quickly moved up the academic ranks at Kent State and was appointed full professor in 1960, the youngest person in the history of the university to be so appointed.Â She became the chairperson of the Physical Education Department and, later, assistant dean of the School of Physical Education and Recreation.Â She also authored four books during this time.Â At her retirement dinner in 1979, she was awarded the Presidentâ??s Medal, the 13th person in the history of the university, and the second woman, to be so honored.Â The citation for the medal pretty well sums her career:Â â??This medal is presented to Dr. Beverly L. Seidel, scholar, mentor, coach, teacher and administrator and friend of Kent State University, who has been and is a constant inspiration to those around her.Â An idealist with a superior, noble spirit, Dr. Seidel has transferred her enthusiasm for life and knowledge to thousands of young minds.Â Dedicated to the Kent State University community for over 30 years, Dr. Seidel has devoted her life to the improvement of the university through her extensive committee work, academic aptitude and interest in all facets of university life.Â In true Socratic fashion, Dr. Seidel has shown that knowledge and wisdom are food for the soul.Â There are none more qualified to receive the Presidentâ??s Medal than Professor Beverly L. Seidel, author, educator and humanitarian.â?Â After retirement, Becky had a home built on a 20-acre plat near Marion, IN.Â She, along with her mother, Wava, and brother, Bud, resided there for 18 years.Â Although living in the beautiful, peaceful country was inspiring, eventually the work involved in caring for the property became increasingly difficult, so the Seidels moved to Tulsa in 1998 in order to be nearer to family members.Â Wava, Bud and Becky joined Immanuel in March, 1999â??at which time Pastor Hilken remarked, â??Itâ??s a bit unusual for a 90-something year old mother and her two 70-something kids to join the church!â?Â Â Becky was always active in church.Â Among other things, she taught a teen-age Bible study at Faith Lutheran Church in Kent, OH, an â??Adamâ??s Ribâ? Bible study for women only at St. James in Marion, IN and the revamping of the Hilltoppers at Immanuel, Broken Arrow, OK.Â Becky leaves one sister, Peg Robison; one niece, Sandy Fickett (Doug); seven nephews, Robert Moses (Lisa), Marc Moses (Debbie), Matthew Moses, Jeff Moses, Larry Seidel, Bruce Robison (Erika), Bill Robison (Dee) and several great nieces and nephews.Â She was preceded in death by her father, Louis, mother, Wava, sister, Bobbie, and brother, Bud. In lieu of flowers donations may be made to Immanuel Lutheran Church. Â A memorial service will be held on Tuesday, July 27, 2010, 10:00 am at Immanuel Lutheran Church in Broken Arrow.

Beverly L. (Becky) Seidel was born on July 5, 1920 in Kendallville, IN., the daughter of Louis S. W. Seidel and Wava Belle (nee Brandeberry) Seidel.Â Since July 4, 1920 fell on a Sunday, and since people back then werenâ??t allowed to â??celebrateâ?... View Obituary & Service Information

The family of Beverly L. Seidel created this Life Tributes page to make it easy to share your memories.