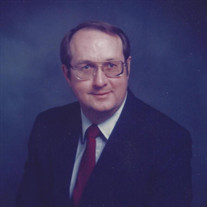 Bill Ernest Ladd passed away on June 5, 2020 to be with his Savior. He was born to Christopher Ladd and Edna (Barrett) Ladd in Prague, OK on August 17, 1934. He was raised with his sister and brother in Glendale, CA where he graduated from Hoover High School and attended Glendale College before joining the United States Navy. After his service in the Navy he returned to Oklahoma to attend Oklahoma A and M (OSU) and then graduated from Central State University (UCO) with a degree In Business Administration. He worked as an insurance adjustor in Springfield, MO before continuing his education and receiving his law degree from the University of Tulsa. Bill was an assistant district attorney under then District Attorney S.M. “Buddy” Fallis and later served as a special district judge and a municipal court judge. He then spent many years in private practice. Bill was a graduate of the Judicial School of Advocacy in Reno. NV and belonged to the Tulsa County, Oklahoma, and American Bar Associations. He displayed his quick wit and flair for comedy in “The Red Glove Review” for the Tulsa Cerebral Palsy Association and the Tulsa County Bar Association’s “Gridiron”. In the past he had been on the executive committee of the Tulsa chapter of the March of Dimes. He was a member of Sertoma and the Elks Club civic organizations. Bill was a member of Asbury United Methodist Church. He was preceded in death by his parents, his brother Doug Ladd, his sister Zae Elliott, and his first wife Ann and infant son Mark. He is survived by his son Steven Ladd, daughter Kristen White (Michael), granddaughter Gabby White and many nieces, nephews, cousins and friends. Viewing will be held Wednesday, June 10, 2020 from 5:00 pm to 7:00 pm at Floral Haven Funeral Home. A graveside service will be held at 10:00 a.m. Thursday, June 11, 2020 at Floral Haven Funeral Home and Memorial Gardens. In lieu of flowers, the family requests donations to clarehouse.org where he was lovingly cared for in his final days.

Bill Ernest Ladd passed away on June 5, 2020 to be with his Savior. He was born to Christopher Ladd and Edna (Barrett) Ladd in Prague, OK on August 17, 1934. He was raised with his sister and brother in Glendale, CA where he graduated from Hoover... View Obituary & Service Information

The family of Bill E. Ladd created this Life Tributes page to make it easy to share your memories.

Send flowers to the Ladd family.