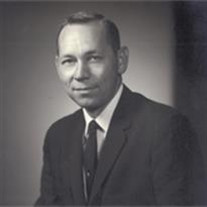 Bill Scott Richards was born April 21, 1924, in Shawnee, Oklahoma, to Mary Ethyl (Clayton) and Allen Thurman Richards, the seventh of their eight children. Bill lost his father as a young boy, and was self-supporting from the age of 12. While attending Shawnee High School, he met his future wife, Anne Marise Porterfield. He worked a number of odd jobs at night and attended school during the day. He graduated in 1943. Upon graduation, he was inducted into the United States Navy and was stationed at the Naval Post Office in San Francisco. He and Anne were married in San Francisco October 24, 1943. Six months later he was sent to Oahu, Hawaii, where he served in the navy for the next two years. Anne returned to Shawnee to await his return. When Bill returned home in 1946, he worked in the County Clerks office in Shawnee as an abstractor while also attending OBU and Oklahoma University. He graduated from OU in 1951, at which time he was offered a job with the accounting firm, Haskins and Sells in Tulsa. He and Anne moved to Tulsa and it became their life-long home. In the late 70â??s, Bill became the Chief Financial Officer of Grant Corporation, an oil field supply company, and retired in 1983 at the age of 59. Bill spent many happy years in retirement, pursuing all his hobbies and interests. He perfected his golf game, where he and Anne were long-time members of the Oaks Country Club, mastered photography, painting and woodworking. He enjoyed hunting, fishing, gardening, and traveling. He was an active member of the local chapter of the Sons of the American Revolution, and served two terms as President of the local chapter, and two terms as the State President. He also served for many years as Secretary/Treasurer. He was active in the scholarship programs and enjoyed working with the Good Citizen Awards in the local high schools. Bill is survived by his wife of 66 years, Anne Marise, his three children, Karen Richards McKee and husband, Chris, Julie Massey Thompson, Matthew Clayton Richards and wife, Jessie, five grandsons, Jake McKee, Cullen McKee, William Massey, Wade Thompson, Clayton Richards, granddaughters Melissa Richards, Tammy Nolan and husband, Chris,Â  and great granddaughters, Bridget McKee, Zoe and Eliana Nolan, and brother Vernon Richards. Bill was a devoted husband and father, a hard-working and honest man. He will be missed. Visitation will be held 12:00-9:00PM Thursday at Floral Haven Funeral Home. Funeral Services will be held 12:30PM Friday, September 17, 2010 at Floral Haven Funeral Home Chapel.

Bill Scott Richards was born April 21, 1924, in Shawnee, Oklahoma, to Mary Ethyl (Clayton) and Allen Thurman Richards, the seventh of their eight children. Bill lost his father as a young boy, and was self-supporting from the age of 12. While... View Obituary & Service Information

The family of Bill Scott Richards created this Life Tributes page to make it easy to share your memories.