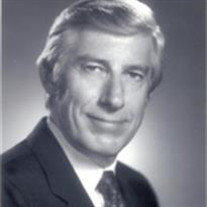 Bill Van Meter was born March 19, 1933 in Bartlesville Oklahoma to Claude and Essie Van Meter.Â  He is survived by his wife of 58 years, Charlene, and three children: Greg Van Meter of Houston, Shonda Van Meter of Tulsa, and Michele Millard of Denver.Â  Bill had seven grandchildren: Scott, Chase, Taylor, Zach, Shane, Kelly and Ryan, and four great grandchildren: Ty, Grayson, Alyssa and Preston.Â  He was preceded in death by his parents and five siblings. Â  Â Bill will be fondly remembered for his love of his family. He was dedicated to looking after each and every member, and remained in close contact with his family throughout his life and during his retirement. Bill will also be greatly missed by his beloved yorkies Jazzy and Tedi. Â  After graduating high school from Bartlesville Central High, Bill began his college years at the Colorado School of Mines in Golden, Colorado. He finished up at OU in 1955, where he received a degree in Petroleum Engineering. This would be the beginning of a lifelong affection for all things OU, particularly football. Bill was a former player himself, and was a dedicated supporter.Â  After college he also served more than three years in the U.S. Air Force as a pilot. Â  Bill had a long and respected career as an oil and gas industry executive. After receiving his degree, Bill joined Carter Oil Company in Seminole, Oklahoma, followed by many technical and management assignments for Exxon USA and Esso Middle East.Â  He was President of Natomas International, Inc., in Jakarta, Indonesia, as well as President of Natomas North America, Inc. in San Francisco. He was co-founder and CEO of Murexco Petroleum in Dallas Texas. Most recently, before his retirement in 1997, he served as President of Energy Companies of ONEOK.Â  He also served on several board of directors of energy companies and banks. Â  He was a longtime member of the Tulsa Menâ??s Club, as well as a member of the American Petroleum Institute Twenty Five Year Club, the Independent Petroleum Association of America, and the Interstate Oil Compact Commission. Bill also enjoyed playing golf and was a past member of the Oaks County Club and Cedar Ridge Golf Club. Â  Along with his wife Charlene, Bill was a member of the First United Methodist Church in Tulsa. Â  A celebration of his life will be held Wednesday, April 20th, at 10 a.m. at Floral Haven in Broken Arrow. In lieu of flowers, the Van Meter family asks that friends and family donate to the charity of their choice.

The family of Bill M. Van Meter created this Life Tributes page to make it easy to share your memories.