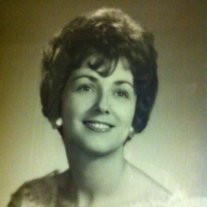 Billie Jean Gariepy was born Billie Jean Howard on November 13, 1935 in Tulsa, OK to John Alvin and Etta Mae (Groomes) Howard. She spent the majority of her life in Tulsa. Billie passed away peacefully at her Brookside home on the evening of June 20, 2013 after a courageous battle with cancer.She was preceded in death by: parents; John Alvin and Etta Mae Howard, sisters’, Delphine Inez Conley “Tini” and Frances Eloise Gafford “Frannie”; and brother, Groomes Alvin Howard “Mickey”.Billie is survived by her 2 sisters, Wanda Lou Upton of Tulsa, and Johnnie Jane McClintick of Hobbs, NM, her 2 daughters and sons in law, Nicole Gariepy and Jeff Morris of Dallas, TX, and Michelle Gautney and her beloved granddaughter Abigail York Gautney and Jamie Northington and his children Sophia Belle and Coltrane James of Richardson, TX, nieces and nephews, Wes and Shirley Conley, Jerry Conley, Bill and Ann Upton, Joe and Buernele Upton, Sandra Pennington, Donna House, Cathi and David Wing and Mike and Jayne Howard, Debbie McClintick, Dana Benford and Bradley McClintick and various great nieces, nephews and cousins.Billie graduated from Central High School in 1954. After her graduation she began her corporate career at Marathon Oil. She was transferred to Shreveport, LA, where she met and married her husband. Her daughter, Nicole, was born in 1966. In 1968 they moved to Houston, TX where her husband began working for IBM and Billie was a stay at home Mom. Michelle was born in Houston in 1969. Billie and her daughters left Houston in 1974 and returned to Tulsa.Billie remained a stay at home Mom until her girls were in elementary school. She then resumed her career at the Oklahoma House of Representatives as an administrative assistant for Joan Hastings and JD Whorton. During this time, Nicole and Michelle’s Grandmother lived at Billie’s house and took care of the girls while Billie worked in Oklahoma City. Upon her return to Tulsa, she worked for 4th National Bank as an administrative assistant and ended her corporate career at TransOk as a facilities planner. She also had a second job at Sanger Harris where she worked evenings and weekends. Sanger Harris was purchased by Foley’s and she worked there until she retired (With her lifetime discount). You read that correctly. A lifetime discount and she used it, frequently!Billie LOVED to shop!!! She would spend hours at the mall, Walmart, Garden Ridge, JoAnne’s, Michaels and Hobby Lobby. You can name just about any store and when she walked through the doors, they saw her coming and knew her by name. Billie was an arts and crafts fanatic, especially scrapbooking! She loved making scrapbooks and while she was one of the most organized people in the world, when she started crafting the entire house became her studio. It was a mess but she always turned that mess into beautiful things. She was so talented. Every Memorial Day, she took anyone that would go with her to the Memorial Park Cemetery to decorate our family’s graves – all of them. Everyone had beautiful blankets of their favorite flowers and she always made Mickey’s blanket, Red, White and Blue. Our family had the most gorgeous graves in town.Billie played Canasta with a group of wonderful women. She had so much fun and looked forward to every game. The “Canasta Girls” enriched her life and we are so grateful to each and every one of them, especially, Ardis Miller and Merele Christ. There will be a card game going on in heaven every Friday.Billie loved her daughters with every pore of her being. They were the center of her Universe and everyone knew it. They are both so fortunate to have had such a wonderful and loving Mother. She will be missed more than words can say but she raised two very strong, competent, women and she was so proud of them and all their accomplishments.When her Granddaughter came along, nothing filled her heart with more joy than that baby girl. Nicole and Michelle took the back seat and Abbey was riding shot gun. She called her Grandmother, Nee Nee. No one really knows why but it stuck like glue and she thought it was so cute and creative. Billie loved Abigail more than anything else in the world and everyone knew it.She received three new additions to her family when Michelle met Jamie. He had a set of twins and she fell in love the moment she laid eyes on them. And, the feeling was mutual. Sophia and Coltrane are adorable and thought Nee Nee was wonderful.Billie would not want us to leave out her “Angel” kitten Cassandra “Cassey”. She inherited her when we lost Frannie. Although she wasn’t very happy about it, she grew to love that cat and treated her like royalty. Another animal we must mention is her daughter Nicole’s dog, Alex. He was and is a mess but nobody adored Billie Jean more than that dog. He is still looking for her because he hates dog food. He didn’t eat much dog food when she was around because he got to eat whatever she was eating and you can tell. He is on a diet and not happy his buffet has been shut down.Billie was a member of First Methodist Church most of her life. She also attended Woodland Acres Baptist church for many years.You never had to ask Billie where she stood because she had already told you.

Billie Jean Gariepy was born Billie Jean Howard on November 13, 1935 in Tulsa, OK to John Alvin and Etta Mae (Groomes) Howard. She spent the majority of her life in Tulsa. Billie passed away peacefully at her Brookside home on the evening... View Obituary & Service Information

The family of Billie Jean Gariepy created this Life Tributes page to make it easy to share your memories.