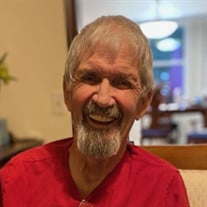 On Saturday, October 10 2020, in the early morning hours, our Lord and Savior, Jesus Christ, called Bill Buster home. Bill was a faithful member of Church on the Move for 28 years. He was also a friendly face as a greeter at Walmart for over... View Obituary & Service Information

The family of Billy Allen Buster created this Life Tributes page to make it easy to share your memories.

Send flowers to the Buster family.