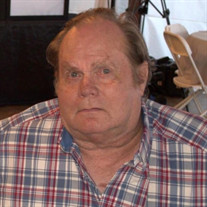 Billy Joe Esslinger, 70 of Broken Arrow, Oklahoma passed from this life on Monday, August 31, 2020 in Tulsa, Oklahoma. He was born February 2, 1950 in Alabama City, Alabama to his parents, Terry Strickland Esslinger and Dorothy Marshall Esslinger. He married the love of his life, Sally Smith on October 26, 1968 in Long Beach, California and they have shared in over 51 wonderful years together building wonderful memories. Billy was a diesel mechanic for many years and owned his own Diesel roadside service. Later in life became an Environmental Specialist. Billy was a Veteran of the United States Army and served in Vietnam war. Billy is survived by his loving wife, Sally Esslinger of the home; three children, Brian Esslinger of Bellflower, California, Tonya Hamersley and her husband Terry of Broken Arrow, Oklahoma and Terry Esslinger and his wife Sydney of Broken Arrow, Oklahoma; three grandchildren, Deanna Smith, Tyler Hamersley and Addyson Esslinger all of Broken Arrow, Oklahoma; and many friends and extended family members. He was preceded in death by his parents, Terry and Joyce Esslinger and Dorothy and Al Miller and one brother, Danny Esslinger. Visitation will be held from 3-7 p.m. on Friday, September 4, 2020 at Floral Haven Funeral Home. Funeral services will be held at 3 p.m. on Saturday, September 5, 2020 at Floral Haven's Funeral Home Chapel. Military honors will be provided by the United States Army Honor Guard. ***Services will be live streamed starting at 2:45 p.m. on 9/5/2020. To view the service live, please click on the following link: http://webcast.funeralvue.com/events/viewer/36255.

The family of Billy Joe Esslinger created this Life Tributes page to make it easy to share your memories.

Send flowers to the Esslinger family.