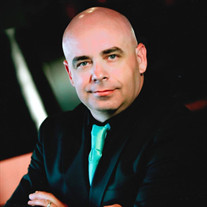 Bobby J. Jones Jr. passed away on Dec.30th, 2021 after a fierce battle with Covid, Bobby was viewed by many, as the most loyal person they ever met. Bobby was born June 27, 1970, in Tulsa, Oklahoma to Bobby Joe and Larine Dee (Pennington) Jones, Sr. Bobby was raised by his grandparents Joe and Edith Jones and lived Tulsa until 1982, then the family moved to Claremore. Bobby attended Claremore High School and married his high school sweetheart, Misty (Tudor) Jones and they had 2 children together. Myles and Alex. Although the marriage did not last, Bobby and Misty had a lifelong friendship. Bobby joined the United States Marine Corps in 1992. He served as an MP at HMX-1 where he guarded the life of the president and other dignitaries. Bobby was honorably discharged, as a Corporal, after his enlistment ended he returned to Claremore. Bobby earned his CDL license and was an award winning driver, for Averitt ,for over 20 years. In 2009 Bobby married, MaryJean Catuday. Bobby was known for his love of dirt bike racing and riding Harleys with his friends. He loved to fly ultra-light planes and go off road on UTV's. Bobby was also a skilled woodwork, making furniture, fancy pens, corn hole games and practical items for family and friends under the logo of Ubran Cutz. Bobby was a true friend who mattered greatly in the lives of his family and friends. He is survived by his wife, MaryJean, His son Myles and wife Amanda and grandson Anson of Claremore. Son Alex and grandsons Koston and Riven of Pryor. His mother and sisters Holly and Michelle. Visitation will be 2:00 PM to 6:00 PM, Friday, January 7, 2022, at Floral Haven Funeral Home. The funeral service will be 2:00 PM, Saturday, January 8, 2022, at Floral Haven Rose Chapel. For those that cannot attend the service in person webcasting is available at the following link: https://webcast.funeralvue.com/events/viewer/66596/hash:606F8A8335B4B0AF

Bobby J. Jones Jr. passed away on Dec.30th, 2021 after a fierce battle with Covid, Bobby was viewed by many, as the most loyal person they ever met. Bobby was born June 27, 1970, in Tulsa, Oklahoma to Bobby Joe and Larine Dee (Pennington) Jones,... View Obituary & Service Information

The family of Bobby Joe Jones Jr created this Life Tributes page to make it easy to share your memories.