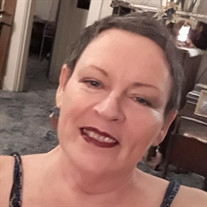 Brenda Sue Truelove Chafin was born in Muskogee, Ok on May 12, 1950 to WC and Katy (Hisaw) Truelove. She was the youngest of four children. Kenny, Terry, and Linda came before. The family moved to Broken Arrow in 1951 where Chuck and Katy built a home and raised their family on West Commercial Street. They owned approximately 15 acres of land which allowed the kids to live the country life. Brenda developed a passion for horses at a very early age. She barrel raced and team roped for many years. She often spoke of her favorite horse, Sadie. Brenda graduated from Broken Arrow High School in 1968 and then attended NEO in Miami, OK for one year. In 1972, she married Ralph Wayne Chafin and to this union a son was born. Burton Lee Chafin entered the world December 27, 1972 and was the center of her life. Ralph and Brenda later divorced and Brenda moved back to Broken Arrow with Burt. Brenda was an aircraft technician for McDonnell Douglas for over 20 years where she made many lifelong friends. She loved to travel to New York to visit her brother Kenny. She also loved Mardi Gras and trips to the beach. Her closest friends were Debbie and Sharon. She met Sharon Cox in grade school and the two of them have shared many adventures together. She could always count on Sharon to be there when she needed her. She met Debbie Harrell when Burt bit Debbie’s son Scott. They could have gotten into a fight but instead became inseparable friends. Brenda introduced Debbie to her husband, Paul who unbeknownst to him signed up for a honey do list in two houses. Even recently, Paul came over to Brenda’s and replaced the doorknob and changed light bulbs for her. Brenda’s day began with medication and then with phone calls to Sharon and Debbie. It goes without saying that these friendships were blessings to her. Brenda became a grandmother in 1993 when Shelby Lynn Chafin was born. She did not want to be called Grandma so she came up with Doma. Jeremiah Wayne and Briar Lee were born in 1997 and 2000 respectively. She only babysat Jeremiah once and it cost her $120 ticket for not using a carseat. It was an expensive trip to the snow cone stand to pacify a crying toddler. In 2018, Truman Lee and Zora Bell were born making Brenda a great grandmother. Stella Ruth followed in 2020. She adored her great grandchildren and had recently had Christmas with all of her family. Happy to see the babies running around her house. Brenda became ill 15 years ago after a surgery that left her on oxygen full time. As the years passed, her lungs diminished. She became house bound and struggled to keep her independence which she so fiercely wanted. She was diagnosed with lung cancer and tried treatments, but the treatments worsened her emphysema to the point that she had to stop. She spent her days at home with Oreo and Missy and connected with many friends and family through social media. Her brother, Terry and sister in law Pam would bring her dinner daily. They were a huge blessing. Valerie came into Brenda’s life in 2012. If Brenda needed anything, she would say, “Call Valerie”. God placed a lot of people in Brenda’s life that enabled her to stay home and maintain her independence. Valerie was definitely one of them. Brenda rarely posted a picture of herself on social media with her oxygen. She didn’t want everyone to know about the cancer or her health in general. She wanted to be thought of as the witty, intelligent woman she was and not concern people with her struggles. We will miss her deeply, but we are confident that Brenda is restored and is laughing and chasing adventures in Heaven. A Celebration of Life Service will be held 12:30 PM, Monday, January 24, 2022 at the Floral Haven Funeral Home Chapel in Broken Arrow, Oklahoma. For the family and friends that are unable to join the family in person , can join the family by webcast at the following link: https://webcast.funeralvue.com/events/viewer/67318/hash:30B1BB1C4B885159

Brenda Sue Truelove Chafin was born in Muskogee, Ok on May 12, 1950 to WC and Katy (Hisaw) Truelove. She was the youngest of four children. Kenny, Terry, and Linda came before. The family moved to Broken Arrow in 1951 where Chuck and Katy built... View Obituary & Service Information

The family of Brenda Sue Chafin created this Life Tributes page to make it easy to share your memories.

Brenda Sue Truelove Chafin was born in Muskogee, Ok on May 12,...

Send flowers to the Chafin family.