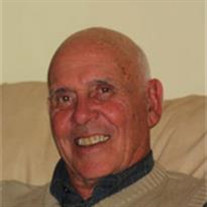 Brice L. Forgy, Jr. Â  Brice L. Forgy, Jr., 78, of Tulsa, OK, passed away on Monday, November 7. He was born on January 22, 1933 in Tahlequah, OK where he worked in his parentsâ?? restaurant, delivering to the residents at Northeastern State University. He graduated from Oswego High School in Oswego, KS where he excelled as an athlete in football, track and other sports. Upon graduation, he served his country for 4 years as a member of the U.S. Navy, defending freedom in Korea and Southeast Asia.Â  Â  After his honorable discharge from the U.S. Navy, Brice attended college in Parsons, KS and then married and raised two children, Randall Brice Forgy and Reneeâ?? Willette Forgy, both of whom survive him. He moved to Houston, TX in 1957 where he worked for Keystone Valve Corporation. While in Houston, he became a Deacon of Trinity Presbyterian Church and became a member of the Masonic Lodge. He moved to St. Louis, MO in 1966 to start and operate his own business affiliated with Keystone Valve, ultimately growing the organization into a multi-state distributorship associated with industrial piping and valve sales and service. Â  While in St. Louis, he utilized his skills as a coach with Khoury League baseball and served on the Board of Directors for Khoury League. He was a member of the Order of Eastern Star, a member of the Moolah Shrine, a 32nd Degree Mason and a member of the Scottish Rite. He was a Board Member of Sunset Assembly, International Order of Rainbow for Girls as well as a member of their Missouri State Executive Board. Â  Brice was also an avid car collector and was a member of the Classic Car Club in St. Louis as well as the Horseless Carriage Club. Â  Brice moved to Tulsa, OK in 1997 and married Carolyn Jameson Ford. While in Tulsa, Briceâ??s family expanded to include children Stacey Butterfield and Rick & Monica Ford and grandchildren Jorja and Joseph Ford, all of whom survive him. His love for collecting and dealing antiques, as well as interacting with people was evident at the I-44 Antique Mall. Briceâ??s greatest love, above all else, was spending time with his family. Â  Brice is survived by loving wife Carolyn J. Forgy and mother-in-law Inez Jameson; sister Jerry Holley of Kemha, TX; four children, Randall B. Forgy and wife Cynthia, Reneeâ?? W. Forgy; Stacey Butterfield and Rick Ford and wife Monica; and four grandchildren, Zachary B. Forgy, Alexandra M. Forgy, Jorja G. Ford and Joseph W. Ford, nieces, nephews, as well as many dear friends across the years. Â  Funeral services will include Visitation on Thursday evening from 5 pm â?? 7 pm at Floral Haven Funeral Home. The Celebration of Life will be held on Friday at 10 am at Floral Haven. In lieu of flowers, donations may be made to the American Legion and Blue Star Moms.

Brice L. Forgy, Jr. Â  Brice L. Forgy, Jr., 78, of Tulsa, OK, passed away on Monday, November 7. He was born on January 22, 1933 in Tahlequah, OK where he worked in his parentsâ?? restaurant, delivering to the residents at Northeastern State... View Obituary & Service Information

The family of Brice L. Forgy, Jr. created this Life Tributes page to make it easy to share your memories.