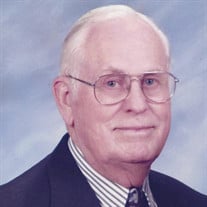 Buford Wade Bryant, Jr. passed away peacefully in his sleep of natural causes on Sunday, May 3rd, 2020, in Broken Arrow, Oklahoma. He was 96 years old. He was born on August 9th, 1923 in McQueen, Oklahoma to his parents, Buford W. Bryant, Sr. and Bartie Arnwine Bryant. He grew up on a farm and they endured the Great Depression as well as the Dust Bowl. He graduated from Louis Hill High School and attended Panhandle A & M College in Goodwell, Oklahoma where he lettered in basketball. He was drafted into the Army Air Corps during World War II. He married the love of his life, Palma “Pam” Patrick in 1942. They lived for a while in Denver and moved back to Tulsa before their son, Gary, was born. Buford was hired by Public Service Company in the meter department. He eventually moved into the commercial customer service department. He also oversaw the contracting of tree trimming companies to keep Tulsa’s trees away from the electric wires. He was instrumental in getting a lot of new housing and commercial developments to install their electric lines underground. He retired in 1985. Buford is survived by his son, Gary L. Bryant; daughter-in-law, Judy, and grandson, Shaun; a sister, Geraldene Bebb; brother Loyd Bryant and his wife, Carolyn; and many nieces and nephews. He was known as “June” (short for Junior) to his relatives. A niece who visited him often is KaJean Miller, and her husband Steve. He lost Pam in 2006, and his parents in the mid-nineties. His brother Dwane passed away in 2017. He is now reunited with all his loved ones who went before him and we can only imagine the joyful reception he got when he passed through those pearly gates. He had many friends and he cherished visiting with them at restaurants and coffee shops on a daily basis. He was a long-time member of First Baptist Church of Broken Arrow. He was a 32nd degree Mason in the Guthrie Consistory. When Gary was growing up, he remembers countless trips to the two family farms to visit both sets of grandparents. Summer weekends were spent at beautiful Stony Point Lodge on Grand Lake, a PSO employee perk. Families could stay there free of charge and there were endless varieties of games and activities, including fishing and boating. After Buford retired, he and Pam enjoyed traveling, especially with the PSO Circuit Riders. One trip was a 3-week bus trip through the Pacific Northwest and Canada. They enjoyed a trip to Hawaii. He and Pam went to Branson more times than we can count, and sometimes they would go on the spur of the moment. They also enjoyed square dancing with the Circuit Riders. His proudest moment was when he became a Grandpa. He was a devoted Grandpa to Shaun. They were very close and talked on the phone nearly every day up until he passed away. Donations may be made in his name to Oklahoma Medical Research Foundation, omrf.org, or to a charity of your choice. In the case that you choose a charity please ensure that we are notified, so that we can issue a proper thank you. A small graveside service was held Friday, May 8, 2020 at Floral Haven Cemetery.

Buford Wade Bryant, Jr. passed away peacefully in his sleep of natural causes on Sunday, May 3rd, 2020, in Broken Arrow, Oklahoma. He was 96 years old. He was born on August 9th, 1923 in McQueen, Oklahoma to his parents, Buford W. Bryant, Sr.... View Obituary & Service Information

The family of Buford Wade Bryant Jr created this Life Tributes page to make it easy to share your memories.

Buford Wade Bryant, Jr. passed away peacefully in his sleep of...

Send flowers to the Bryant family.