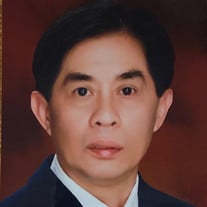 Cal David Payne, 57, of Tulsa, Oklahoma passed from this life on Sunday, July 19, 2020 in a Tulsa hospital. He was born October 15,1962 in Phnom Penh, Cambodia. He married the love of his life, Pory Meas on April 25, 1993 in Broken Arrow, Oklahoma and they have shared in over 27 wonderful years together. Cal is survived by his loving wife, Pory Payne of Tulsa, Oklahoma; his two daughters, Lauren Payne of Tulsa, Oklahoma and Cassie Payne of Estero, Florida; his brother Ngab Sokleng of Cambodia; his sisters Ngab Sodah, Ngab Mean and Ngab Sokha of Cambodia; special friends; Debbie and Stan Morris, Bob and Marty Wagoner, David, Billie and Kelli Leech, Larry and Ruthann Wells, Patrick and Jill Schwartz; and many other friends, coworkers and extended family members. Cal David Payne’s journey to the United States began as a refugee from war-torn Cambodia living in Khao Dang Camp in Thailand. During that stay, he met a beautiful young girl and fell in love. Cal was shy about talking to Pory but observed how beautiful and hard-working she was. After 5 years in the camp, Cal’s dream of coming to America came true when he was sponsored by a Cambodian family living in Broken Arrow, Oklahoma. However, he could not bear to leave Pory so only 10 days before he was to leave for the USA, Cal spoke to Pory’s mother, told her that he loved Pory and wanted to marry her. He promised he would find a way to sponsor them after he arrived. In 1989 he came to Broken Arrow. The International Ministry of First Baptist Church Broken Arrow helped him in learning English, and he began a new life. Cal eagerly began his first job at Tank Supply Company in Tulsa and then later accepted a position at Matrix Service Company. He worked for 31 years until his passing. Within the first 2 years of his residence in the USA, Cal became a Christian and was baptized at FBCBA. After four years, God miraculously provided a way for Pory, her mother, and her sister to be reunited with Cal. Cal’s prayers were answered when Pory arrived in January 1993. They were married on April 24, 1993 at First Baptist Church Broken Arrow Oklahoma with the loving support of many Christian friends. God had already spoken to Pory in a dream 7 months before she arrived in the USA. God told her to open the Bible in Genesis and know that I am the One True God. He called her by name and told her she was His child. After Pory joined Cal, she was also baptized to declare her faith in Jesus. Their marriage began with God as the foundation. God gave them two beautiful daughters, Lauren Nicole and then Cassie Erin. Soon after their first year they were able to buy a small house in Broken Arrow where they lived for 16 years. When their daughters both started to school, Cal encouraged Pory to pursue her dream and complete her cosmetology degree. Cal received his USA citizenship in 2000 and Pory in 2005. In 2013 Cal purchased a beautiful new home for his family. He was so thankful to God for the good life he had been given and blessed to live the American dream. Cal was serious about life and rarely smiled except he would grin when he looked at the beautiful girl he had married. Cal was a highly organized man and did not like mistakes or broken things. Lauren relates that her dad could fix everything, especially when it saved him money. Cassie said her dad recycled everything including a shop vacuum that became a planter in his garden. Cal loved to fish. It was his retirement dream to spend lots more time fishing. Cal also loved to cook and compete with Pory for the best cooking. He loved steak, seafood, and jack fruit. Cal lived his life in the right order with God first and loving his family. He was always a hard worker and highly respected at work for his expertise and knowledge. When God welcomed Cal to Heaven, He said “Well done good and faithful servant, husband, and father”. Remembering Cal’s life is a treasure of good memories and long-lasting friendships. Many of us will miss this man who could fix anything. Cal did the right thing and then he did things right. Visitation will be held from 3-7 PM with family present from 5-7 PM on Thursday, July 23, 2020 at Floral Haven Funeral Home. Services will be at 12:30 PM on Friday, July 24, 2020 at Floral Haven Funeral Home Chapel with Mr. Bob Wagoner officiating. ***Services will be live streamed starting at 12:15 p.m. on Friday, July 24, 2020. To view the service live, please click on the following link: http://webcast.funeralvue.com/events/viewer/33540

The family of Cal David Payne created this Life Tributes page to make it easy to share your memories.

Cal David Payne, 57, of Tulsa, Oklahoma passed from this life...

Send flowers to the Payne family.