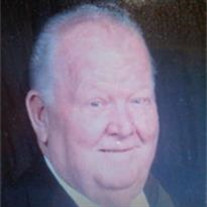 Carl “HAP” Brotherton, Forever Husband, Father, Grandpa and Friend went to be with his Lord on Sunday, December 26th, 2010. He loved people and was the eternal optimist! He was nick-named “Happy” by his fellow Navy Servicemen…and it appeared to be an apt description all his life! Hap considered everyday a “bonus” day and counting his blessings was a hallmark of his life. He leaves this earthly world with a legacy of love! Born in Sapulpa, OK to Robert L. and Frankie (Dryden) Brotherton, May 2nd, 1923. He was the last surviving sibiling out of seven children. Hap graduated from Capital Hill High School in Oklahoma City and joined the Navy the day after Pearl Harbor. During his flight training in Chicago Hap met the love of his life Peggy Ann Pretkel. After serving his beloved country in the South Pacific as a Navy pilot for three years he returned and married the Queen of his heart. Just days before his passing he renewed his wedding vows to his wife of 65 years. Hap is survived by his beloved wife Peggy, a daughter, Carla Hubbard, son-in-law, Daniel Hubbard, son, Michael Brotherton, daughter-in-law, Beth Brotherton, grandchildren; Amanda Simcoe, Sam Simcoe, Will Simcoe, Alyssa Brotherton and Danyel Hubbard. A Celebration of a “Life Well Lived” will be held at Trinity Episcopal Church in Downtown Tulsa at 11a.m. On Thursday, December 30th, 2010. In lieu of flowers, Hap would be honored by memorials donated to “Iron Gate” of Trinity or St. Francis Hospice.Â Â Floral Haven 252-2518

The family of Carl David Brotherton created this Life Tributes page to make it easy to share your memories.