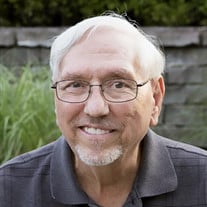 Carl Wiley White went to meet his Lord on Tuesday, January 21, 2020, at 80½ years old, after a hard fought battle with leukemia. Carl was born on June 21, 1939 to Wiley and Helen (Ottinger) White in Prairie Grove, Arkansas. As a child, Carl accepted Christ as his Savior. Baptism and rededication came in 1994. The older of two sons, Carl developed many passions including a love of teaching, of sports, of music, of people and of service to community. Carl had a way of ensuring that the people around him knew that they were noticed and loved. His love for people and for life will be sorely missed. The family along with many friends has lost a remarkable man. The family moved to Keystone, Oklahoma, where Carl graduated as valedictorian in 1957. Degrees from Northeastern State University in 1961 and Oklahoma State University in 1985 followed. While a school teacher for Sand Springs Public Schools for 28 years, Carl added additional careers to supplement his income. Working 30 years for DUCAT (Doorman, Usher, Cashier, Attendant and Ticket taker) and 20 years for Tulsa Drillers, offered him opportunity to make more and more friends. At his kids schools, Carl “The Button Man” volunteered at PTA carnivals and fund raisers making badges. He also volunteered for the Cub Scouts. Carl served his community for six years as member or President on the Broken Arrow School Board, meeting even more people! Carl’s last 28 years were spent with his brother and family at Educational Development Corporation, where he was records manager, but his most loved duty was giving tours of the facility! And “Energizer Bunny” Carl, “The Button Man” FINALLY retired in February 2019. Carl is survived by his wife of 45 years, Linda L. (Schoenhals) White; his son Michael and wife Kristin, Adelyn and Owen White; daughter Michelle and husband Randy Yarger, Isabella White and Gentry Yarger; son Matthew White and Trent and Tyler White, all of Broken Arrow, Oklahoma; brother Randall White and wife Carol of Bixby, Oklahoma; and a host of other relatives and friends. Carl was preceded in death by his parents. In lieu of flowers, the family would like memorial donations to be made to the Leukemia and Lymphoma Society and Arrow Heights Baptist Church.

Carl Wiley White went to meet his Lord on Tuesday, January 21, 2020, at 80½ years old, after a hard fought battle with leukemia. Carl was born on June 21, 1939 to Wiley and Helen (Ottinger) White in Prairie Grove, Arkansas. As a child, Carl... View Obituary & Service Information

The family of Carl Wiley White created this Life Tributes page to make it easy to share your memories.

Send flowers to the White family.