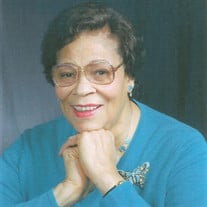 She came into the world on Nov. 6, 1926, in the city of Paramaribo, Suriname, and was christened Carla Celestine Adelide Ferrol. She was the youngest surviving child of 9 children born to Louis & Jacoba Ferrol. She had 6 brothers: Otto Eugene, Paul Hugo, Philibert, and Leindert; two of whom are still alive: Edo & John Leo, and 2 sisters: Alma & Evelene, who preceded her in death. On November 21st, of 1952, Carla brought forth a son, and named him Ruben Humphrey. In 1958, she sought greater opportunities, and immigrated to the United States. Upon arrival, Carla settled in the borough of Queens, New York City, and acclimated to American culture, through the Suriname community, already there. She sought and obtained employment in Manhattan as a keypunch Data entry operator and began to prepare to go back to Suriname, to bring her son, Ruben to America. She did so in November of 1960. In 1968, Carla proudly raised her right hand, in the southern District court, of New York, and became a U.S. citizen. While in New York, Carla became a successful Avon Sales Lady, to supplement her income. In September of 1972, Carla married Jacques Arrias, a longtime childhood friend, that she grew up with in Suriname. In 1973, Carla obtained a job, with American Airlines, that would take her to retirement. In July 1979, she made the decision to move to Tulsa, with The Airline. She soon bought a house and began to settle down in the Prairie culture of Oklahoma. Carla’s life began to blossom and develop, in Tulsa, by taking advantage of several opportunities to build community. She joined a Toast Masters public speaking club, known as the “Speaking Singles.” Carla worked diligently to polish her speaking skills, as well as enjoy the many friendships of the group. Carla also joined a local chapter of The American Business Women’s Association, (A.B.W.A.) As Carla thrived in that organization, she was awarded the “Woman of The Year” honor, in 1984. A big part of Carla’s life centered around her Church involvement. After her initial years at Faith Cumberland Presbyterian Church, Carla found a permanent home at Asbury United Methodist Church. With her lifelong love for singing, she discovered the Ambassadors Choir and joined, at once. After a lifechanging encounter with The Lord Jesus Christ, Carla’s heart to serve Him led her to seek several serving opportunities, at Asbury. She loved to visit and bring meals to Asbury’s homebound and shut ins. A significant community, for Carla, throughout her life at Asbury, was the “New Beginnings” Sunday School Class, led by Betty Reamer. That class was her anchor of belonging, at Asbury, until her home going…… From beginning to end, Carla sought and obtained the maximum fulfilment of every minute of her life. She was easy to befriend, and was blessed with an outgoing, and outreaching personality. In addition, much like the mother of the great Theologian, Augustine of Hippo, the father of Western Theology, Carla prayed relentlessly, diligently, and without ceasing, for her only child and son, Ruben. As such, I was there at her Nursing Home bedside for the last days and hours of her life reassuring her of my presence until the gates of Heaven opened. And, with a visible sense of peace, on her face, Carla stepped over the threshold, and without gasping, took her last gentle breath, at 6:45 AM, Thursday, March 12, 2020….. She is proceeded in death by, her father Louis Ferrol, mother Jacoba (Webber) Ferrol, brother Otto Eugene Ferrol, brother Philibert Ferrol, brother Paul Hugo Ferrol, brother Leindert Ferrol, sister Evelene (Ferrol) Kamperween, and sister Alma (Ferrol) Fernandes. She will be remembered by her son Ruben Ferrol, granddaughter Emily Elizabeth Ferrol, granddaughter Jasmine Nicole Ferrol, ex-spouse Linda (Dreisback) Ferrol, brothers Edo Ferrol, and John Leo Ferrol, and many many friends of note.

She came into the world on Nov. 6, 1926, in the city of Paramaribo, Suriname, and was christened Carla Celestine Adelide Ferrol. She was the youngest surviving child of 9 children born to Louis & Jacoba Ferrol. She had 6 brothers: Otto Eugene,... View Obituary & Service Information

The family of Carla Celestine Arrias created this Life Tributes page to make it easy to share your memories.

Send flowers to the Arrias family.