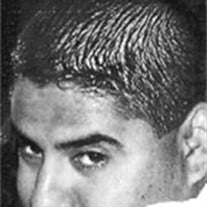 LOPEZ – Carlos, Jr., 30, beloved father, son, brother, and friend, was tragically taken from friends and family early Saturday morning. Carlos leaves behind his wife, Rubi; daughter, Natali Sophia; step-children, Kevin, Mark, and Kimberly; his mother and father, Amparo and Carlos; brother, David; and sisters, Lilian and Viridiana. His amazing presence will be surely missed. Carlos was born in El Paso, TX, raised in Tulsa, OK, and resided in Midland, TX, where he worked for Baker Hughes/Centralift. Upon graduation from Memorial High School, he enlisted in the US Army, where he later became a member of a Special Operations Unit to serve in Iraq War. After leaving the service, Carlos graduated with Honors with a Degree in International business. This exceptional family man and friend will be mourned by all of those he has touched. A Rosary will be held at 7 p.m., Wednesday, November 5, 2008, at Floral Haven Funeral Home Chapel. Catholic Mass is scheduled for 10 a.m., Thursday, October 6, 2008, at Holy Family Cathedral. Carlos Lopez, Jr.Survived By:

The family of Carlos F Lopez Jr. created this Life Tributes page to make it easy to share your memories.