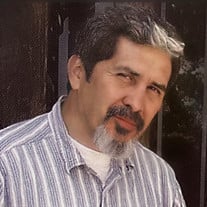 Carlos “Charley” E. Ontiveros, 68, finished his earthly journey on Wednesday, January 19th, 2022 in Tulsa, Oklahoma while surrounded by his wife, daughter, brothers, and sisters. The third son born to Juan H. and Marina E. Ontiveros on July 12th, 1953 in San Antonio, Texas, Charley grew up with his many brothers and sisters in Tulsa, Oklahoma, and graduated from Central High School. He proudly served his country in the United States Marine Corp from 1976 through 1979 where he spent time in South Carolina, California, Southeast Asia, and Japan. After his tour of duty, he began working in the construction industry as a carpenter, where he honed his skills over the next forty-plus years in Tulsa and around the U.S. Carlos became a master craftsman and homebuilder. He was a perfectionist who could build or fix anything he put his mind to and hands-on. In 1997, he met the love of his life, Pennie Harnish, and they were married on October 3rd, 1998. Charley and Pennie welcomed one beloved daughter Maileah Marina Ontiveros in 1999, and together they enjoyed 23 beautiful years. Carlos was a devoted son, husband, father, brother, uncle, cousin, and friend to all that had the privilege of knowing him. Charley had many talents and interests and lived his life as a true renaissance man who cherished above all, his time with family and friends. For those that cannot attend the services in person, webcasting is available at the following link: https://webcast.funeralvue.com/events/viewer/68342/hash:D0624128807D43E2

The family of Carlos Ontiveros created this Life Tributes page to make it easy to share your memories.

Send flowers to the Ontiveros family.