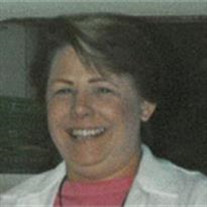 Carol Ruth Mauck passed from this life on May 14, 2012 at her home in Sand Springs, Oklahoma. Carol was born on December 18, 1947 in Tulsa, Oklahoma to James Joseph and Barbara Maxine (Smith) Henderson. She was the owner of Runway Cafe. Carol... View Obituary & Service Information

The family of Carol Ruth Mauck created this Life Tributes page to make it easy to share your memories.